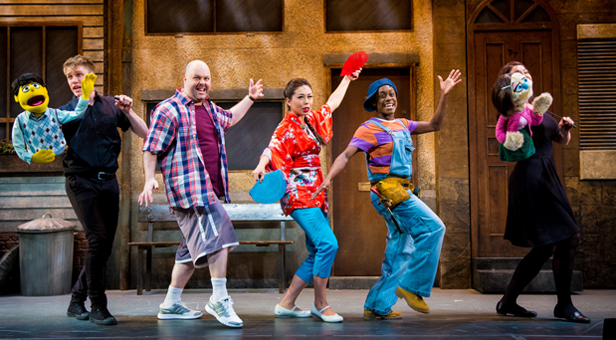 At first, I wasn’t sure what to expect from a musical featuring puppets and their puppeteers side by side, but with a Tony Award ‘Triple Crown’ for Best Musical, Best Score and Best Book, Avenue Q seemed like a risk worth taking.

The show’s opening night in Bournemouth saw a healthy turnout. A seemingly simple set depicting a run-down line of New York apartments (the Avenue Q neighbourhood) with a backdrop of the iconic city’s skyline just behind, was transformed throughout the show. Clever ‘cubby holes’ folded out from the windows of the buildings on Avenue Q, to reveal pint-sized representations of each character’s apartment. I admired how the set designers truly thought outside the box in every aspect, creating unique visuals for the audience to enjoy.

Despite generous helpings of tongue-in-cheek humour, the show addressed deeper issues of identity, finding purpose in life, sex and relationships. It could even be called a study of the human condition, and several moments in Act 2 were very moving, even a little melancholy.

Before the show, I had been informed that you quickly stop watching the actors who control the puppets and turn your attention to the puppets themselves. I can only put this down to the sheer mastery of the performers, who animated the puppets expertly, moving fluidly through the show’s clever choreography. Particular mention goes to Stephen Arden (who voiced puppets ‘Nicky’ and ‘Trekkie Monster’ with impressive vocal diversity) and Jessica Parker, the ‘second arm’, two actors who worked together to operate one puppet. It is hard to imagine the hours of work necessary to coordinate one’s movements with another actor, on top of learning how to operate the puppets. Sarah Harlington and Richard Lowe also deserve a special mention for their vocal skill.

In spite of a few microphone problems, the whole talented cast was on top form, and, with the show over, I couldn’t help but overhear members of the audience exclaiming, ‘Absolutely fantastic!’ and ‘Excellent voices!’ whilst walking out the auditorium door with big, puppet-sized grins on their faces.

A feel-good whirlwind of wit and subtle wisdom, ‘you’d be a muppet to miss’ Avenue Q.