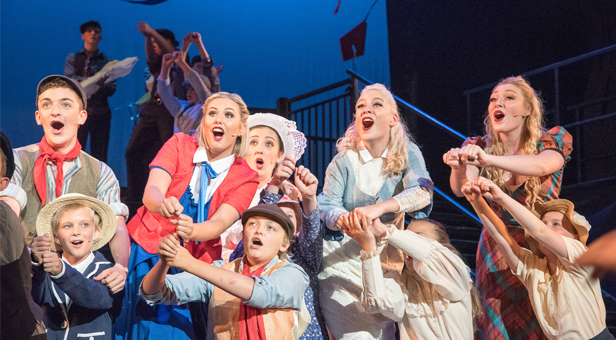 On full-throttle from beginning to end, Broadway Showtunes won a well-deserved standing ovation on its opening night.

The pace slowed and ‘I Could Have Danced All Night’ was beautifully sung before Whistle Down The Wind brought organised chaos and Barnum offered a feast of colour to be eclipsed in the first half with the simple genius of Chaplin in black-and-white.

At the start of the second half, the menace of Sweeney Todd swallowed me up, but I found it hard to pick out the singers from the shadows and wanted better spotlighting.

The only occasion where a handful of performers took to the stage was for ‘A Piece Of Sky’ and what powerful singers those four girls were.

With so many excellent performers it is impossible to name them all, but Joshua Power deserves a mention for his rendition of ‘Pick A Pocket Or Two,’ which was spot on.

Modern moments came with Legally Blonde and The Girl in 14G  and the spectacular Aladdin finalé, swathed in stunning costumes, tap dancing and mid-air splits was genie-us, but for me, the outstanding part of the evening was Cabaret. It had me totally hooked.

Alex Moneypenny was mesmerising as Emcee and stole the show. I could have watched and listened to him all night. The bizarreness of his character as he glided around the set was utterly compelling and I can see him making many more waves on stage in the future.

What a lot of hard work has gone on behind the scenes for Broadway Showtunes and Principal Michelle Guy should feel rightly proud. Accolades must also be given to the expert team of choreographers led by director Sam Taylor-Martin and the terrific band with players from the West End.

Broadway Showtunes continues tonight (17 July) and Saturday (18 July), and there are tickets still available at the Pavilion Box Office http://www.bic.co.uk/whats-on/broadway-showtunes-2015/