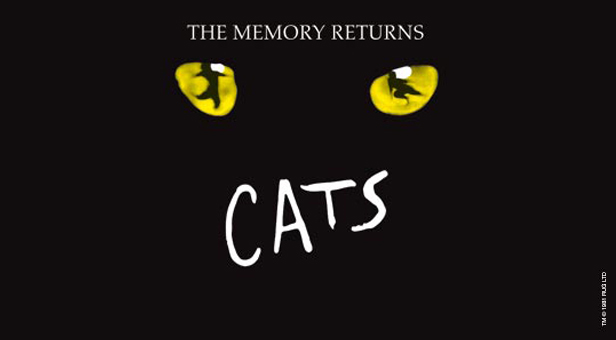 I saw Cats during its first UK tour in 1989 and I have to admit I wasn’t that impressed. I didn’t see it again until a few years ago when I thought it was pretty good. However last night at The Pavilion I couldn’t understand why I had ever had doubts – I absolutely loved it from the first twitch of a whisker to the last flick of a tail.

And I wasn’t the only one, the standing ovation and cheers from the rest of the audience confirmed that when it comes to musicals this really is the cat’s whiskers.

Based on T S Eliot’s Old Possum’s Book of Practical Cats, Andrew Lloyd Weber’s Cats received its world premiere in London in 1981 where it ran for 21 years. It has now been seen by over 50 million people worldwide.

It’s not the most challenging of storyline – on one special night of the year, all Jellicle cats meet at the Jellicle Ball where Old Deuteronomy, their wise and benevolent leader, makes the Jellicle choice and announces which of them will go up to The Heaviside Layer and be reborn into a whole new Jellicle life.

The cats all line up to tell their tale – there’s Gus, the theatre cat, Skimbleshanks the railway cat, Rum Tum Tugger, the preening womaniser, Bustopher Jones, the cat about town and Macavity, the mystery cat and many more.

Grizabella the Glamour Cat, played by Sophia Ragavelas, wins our sympathy as she yearns to be accepted back into the Jellicle fold. Her powerful performance of the hit song Memories certainly touched my heart. Joseph Poulton was stunning as Mr Mistoffelees the magical cat. A ballet dancer by training, he delighted the audience with his performance which truly was magical. Every cast member really deserves praising by name as all were perfect vocally, with their timing, dancing and feline movements. The live music also adds something to the show. The costumes and make up are also amazing with each cat having its own individual characteristics.

This isn’t a show you just sit and watch – you get caught up in the excitement. The magnificent set, showing the rubbish tip where the Jellicle cats meet, flows down off the stage into the audience. This means the cats can prowl through the auditorium, bringing the action up close, even allowing for some interaction. Strings of bright lights hanging throughout the theatre all add to the atmosphere. The audience loved it as was clear from the applause.

Cats is returning to the West End this December. I can’t see that it could top this performance in Bournemouth. It’s at the Pavilion until Saturday 16 August. Save yourself a journey and see it here!