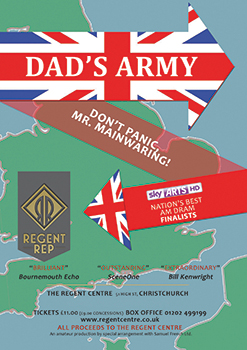 Dad’s Army performed by the Regent Rep was one of the funniest productions I have seen in a while.

Playing to a full house, the three episodes of the classic BBC TV comedy series were re-enacted with a cast of 25 and a full brass ensemble on stage, adding to the vintage atmosphere.

Where this am dram company managed to find so many people who looked like the original actors is beyond me. The cast was brilliant, without exception, but the stand outs were Captain Mainwaring (David Gillard), Pike, (Karl Stanley) Frazer (Alan Ponting), ARP Warden Hodges (Chaz Davenport) and Godfrey (J Haynes). The U-boat captain (Nick Guy) and crew with their fish and chip episode, (one of the best of the original series), was hilarious and the frivolity of the bells and ribbons of the Morris Dancers in the next episode had the audience in stitches.

But it was real fall about comedy time when the Walmington-on-Sea Home Guard interviewed women with the hope of enlisting a few. All the women were exactly right for the parts, but Ivy Samways (Sharon Burn) stole the show. She brought the house down with her expressions alone. Then followed Captain Mainwaring’s liaison with Fiona Gray (Valerie Gillard) which was superbly handled.

The show was real top drawer stuff and Christchurch must be very proud to have such a talented amateur dramatic group in its midst. I thoroughly recommend a visit to the Regent Centre to see them.