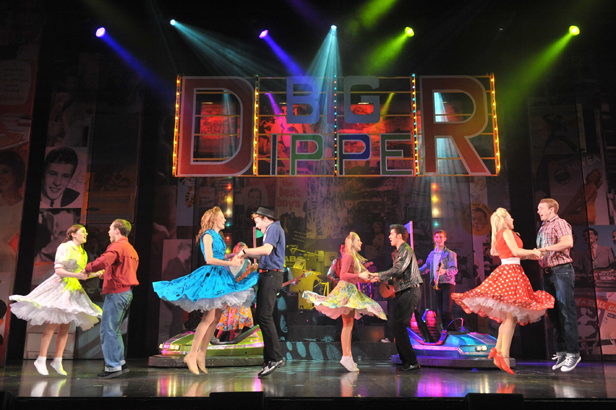 When it comes to the feel good factor, you’ll find it hard to beat ‘Dreamboats and Petticoats’, which is at Bournemouth Pavilion until Saturday 10 May.

This fast moving, highly energetic roller coaster of a ride through the music of the swinging sixties has the audience literally dancing in the aisles.

It’s a simple story of teenagers’ first loves and heartbreak set in 1961 which was inspired by the million selling album ‘Dreamboats and Petticoats’. The musical includes hit after hit from the golden era of rock ‘n’ roll. It features songs from Roy Orbison, The Shadows, Eddie Cochran, Billy Fury, Chuck Berry and many more with music performed live on stage.  It seems that virtually all the cast can play at least one instrument – piano, saxophone, trombone, drums, guitar – many dancing and singing at the same time. What talent!

Bobby socks and pumps, swirling skirts and a stage set featuring posters of adverts and the biggest bands of the time – it all takes you back to the days of vinyl and Wimpy bars.

Set in an Essex youth club and at the seaside, naive Bobby, the brilliant Greg Fossard vies with the very cool Norman, slickly played  by Matthew Colthart  for the attention of flirtatious Sue, captured perfectly by Louise Olley. It’s only when Bobby’s best friend’s sister Laura, transforms from awkward duckling to beautiful swan at her 16th party that Bobby realises where his heart really lies. Hannah Boyce is perfect as Laura and special mention should also go to Will Finlason as Ray, Laura Sillett as Donna and Roger Martin playing Phil.

The cast was all strong, the music superb and the memories golden. Go and join in the fun ‘At The Hop’.