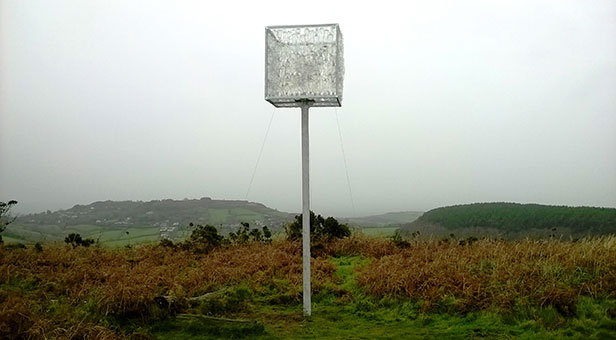 A sculpture by award winning artist Zac Greening entitled ‘Ten Million’ has been installed on the top of the National Trust’s Golden Cap, West Dorset, and highlights the issue of pollution around our coast.

Zac’s inspiration comes principally from nature, which he calls ‘the ultimate sculptress’. He works in a wide range of media from discarded plastic bottles to organic matter. ‘Ten Million’ has been crafted in response to a recent study that found we pollute our oceans with roughly ten million metric tonnes of plastic each year. The light cube on display has been created from over two hundred and fifty up cycled plastic bottles and symbolises only one of these cubic metres. It will be in place until early January, and will be illuminated from late afternoon until around 9pm.

The sculpture has been installed as part of the National Trust’s 2015 Coastal Festival and also ties in with the local Litter Free Coast and Sea campaign along the Dorset and East Devon coast which the National Trust supports and is involved in.

Helen Mann, the National Trust’s General Manager for West and North Dorset said ‘Each year National Trust rangers and volunteers collect many tons of plastic bottles off our beaches. Hosting the ‘Ten million’ artwork here on Golden Cap is an innovative way to help highlight the issues of plastic pollution in our seas and around our coast and is a poignant moment in our year of celebration on the Coast.’

Golden Cap, managed by the National Trust, is the highest point on England’s south coast with breath-taking views from Lyme Regis to Portland Bill, and is part of the Jurassic Coast – England’s only natural World Heritage Site.

The nearest parking for access to view the installation can be found at Langdon Hill, just off the A35 between Chideock and Morcombelake.