Lost Voices from the Titanic 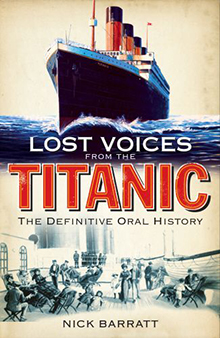 On 15 April 1912, the largest, most expensive, most luxurious ship ever built sank beneath the icy waves of the northern Atlantic. Over 1500 people perished that night in what was to become one of the most examined tragedies of our time.

Told in the words of those who designed her, built her, and survived her, Lost Voices from the Titanic explores the never before told story of the world’s most infamous ship.

Award winning historian, Nick Barrett tells the story of the Titanic from its original conception and design by the owners and naval architects at the White Star Line, through to the disaster itself.

We find out what it was like to embark on the Titanic’s maiden voyage in April 1912. The lives of various passengers are examined in more detail, from the first class aristocrats to the families in third-class, and they transport us back in time to the horror of that freezing Atlantic night.