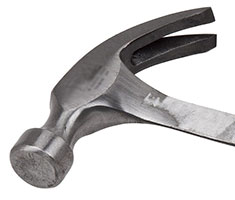 Man reported to have waved a claw hammer in Poole

If you saw this incident, contact the police who are looking for witnesses to this incident in which no one was injured.

If you were in Poole High Street at around 2.20pm on Thursday 28 January, you may have seen a man waving a claw hammer – if so the police would like to speak to you.

No one was injured during the incident.

Officers attended and carried out a search of the area. A 37-year-old man from Ferndown was arrested on suspicion of possession of an offensive weapon in a public place. He has been released under investigation while enquiries continue.

Police Constable Sophie Flood, of Poole police, said: “I understand there were a number of people in the area at the time who witnessed the incident and I would urge them to please get in touch.”

Anyone with information is asked to contact Dorset Police at www.dorset.police.uk, via email 101@dorset.pnn.police.uk or by calling 101, quoting occurrence number 55210017541. Alternatively, to stay 100 per cent anonymous, contact the independent charity Crimestoppers online at Crimestoppers-uk.org or call Freephone 0800 555 111.

for the latest Dorset News from Dorset View

This website uses cookies to improve your experience while you navigate through the website. Out of these, the cookies that are categorized as necessary are stored on your browser as they are essential for the working of basic functionalities of the website. We also use third-party cookies that help us analyze and understand how you use this website. These cookies will be stored in your browser only with your consent. You also have the option to opt-out of these cookies. But opting out of some of these cookies may affect your browsing experience.
Necessary Always Enabled

Performance cookies are used to understand and analyze the key performance indexes of the website which helps in delivering a better user experience for the visitors.

Analytical cookies are used to understand how visitors interact with the website. These cookies help provide information on metrics the number of visitors, bounce rate, traffic source, etc.

Advertisement cookies are used to provide visitors with relevant ads and marketing campaigns. These cookies track visitors across websites and collect information to provide customized ads.

Other uncategorized cookies are those that are being analyzed and have not been classified into a category as yet.

SAVE & ACCEPT
Powered by