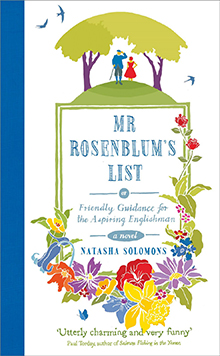 By Natasha Solomons
Published by Sceptre

Inspired by the author’s grandfather and an actual advice leaflet that was handed out to Jewish German refugees, ‘Mr Rosenblum’s List’ is an endearing book.

Jack Rosenblum flees Berlin with his wife Sadie to arrive in England in 1937. Fifteen years later, Sadie is still dreaming about home but Jack, who has built up a successful business in the East End, aspires to become an ‘Englishman.’ He buys his marmalade at Fortnum and Mason, has a suit made by Henry Poole of Savile Row and reads The Times. Yet he still has a thick German accent and to be a true Englishman he decides he must play golf, but no golf club will have a Jew as a member.

Undeterred, Jack Rosenblum decides to build his own course in Dorset and this is where the book comes into its own.  Fraught with problems and confounded by the locals and the Dorset woolly pig, Jack loses almost everything in his determination to succeed.

The novel is a must read.  It has a gentle pace, drawing the reader ever nearer to finding out if Jack’s failures will lead to success and whether or not the Dorset woolly pig really exists.