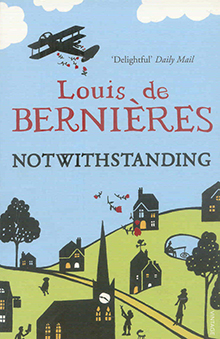 A Frenchman once pointed out to Louis de Bernieres that Britain was the most exotic country in Europe, adding that it was ‘an immense lunatic asylum’. Casting his mind back to the village in southern Surrey where he grew up in the sixties and seventies, but plagued by a novelist’s inability to stick to the truth, Louis de Bernieres brings us stories of a vanished England.

The English village was a place where a lady might dress as a man in plus fours and spend her time shooting squirrels with a twelve bore. A retired general might give up wearing clothes, a spiritualist might live in a cottage with the ghost of her husband, and people might think it quite natural to confi de in a spider that lives in a potting shed.

De Bernieres’ characters roam through the book, appearing in each other’s stories and painting a picture of an entire community. Here we fi nd the atmosphere of those times as it was in the countryside. Notwithstanding is not about an imagined idyll; it is about people who are worth remembering, whose lives are worth celebrating, and who would otherwise have been forgotten.