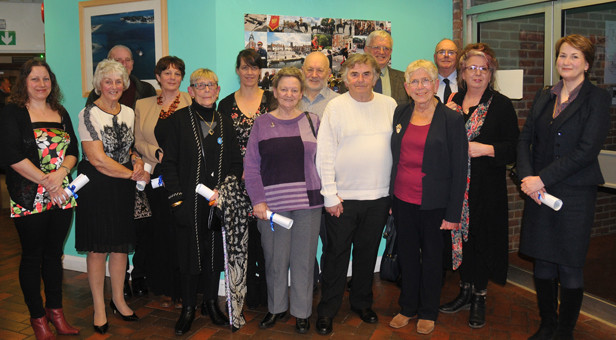 Volunteers of the Year

Purbeck’s ‘Volunteers of the Year’ have been thanked at a council ceremony which has become an annual fixture in the district.

The volunteers, who do exceptional work for their local communities, received recognition and praise from Purbeck District Council Chairman, Councillor Bill Trite.

This year’s event was the eighth annual gathering to be hosted by the district council. Following tradition, Councillor Trite and guests heard about the dedication, energy and enthusiasm of the volunteers who give so much to their communities.
After presenting each with a scroll as a mark of their achievement, Cllr Trite said: “I am humbled by the sheer volume of work done by the volunteers here this evening.  We don’t make enough of the work carried out voluntarily in our communities so it is fitting that we take this opportunity to say thank you for your efforts.
“The volunteers here this evening are just the tip of the iceberg. They make a positive difference from which everyone benefits, often working unseen and unsung behind the scenes.  The district’s volunteers are crucial to our towns and villages and, with ever-decreasing government funding, it is inevitable that we will be looking more to volunteers to plug the gaps.
“We owe you a debt of gratitude for all that you do.”

Fourteen parishes and towns across the district nominated volunteers of the year who were congratulated in front of more than 50 guests.

The volunteers of the year were: