Breath-taking from start to finish 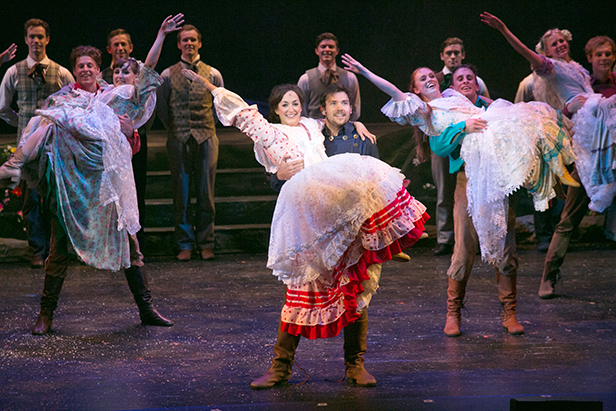 The breath-taking new production of Seven Brides for Seven Brothers at Bournemouth Pavilion Theatre this week is energetic, colourful and vibrant.

The young cast give a masterclass in musical theatre – singing, dancing, somersaults, acrobatics – nothing seems too much of a challenge for them. This restaged version of the classic musical has outstanding daring choreography designed by Emmy nominated Patti Colombo,which is embraced by the cast who simply bubble with enthusiasm. Axe-wielding well toned muscular brothers, brides in pretty romantic dresses, 16 songs – including new ones for this production along with old favourites, means this musical is a total delight.

Helena Blackman (BBC’s How Do You Solve A Problem Like Maria?) is stunning as Milly. She captures the essence of the put upon bride while wowing the audience with her incredible singing voice. Powerful and expressive, she never missed a note and made the songs seem as fresh as the day they were first performed.

Sam Attwater (Dancing On Ice and EastEnders) also stars as Adam, stubborn, proud but eventually accepting that women do have more to offer than just ‘beautiful hides’.

Accolades also for Georgina Parkinson who never seemed to stop bouncing as Alice the youngest bride and Jack Greaves as Gideon perfectly matched as ‘brother’ and eventual husband. Sam Stones as feisty Frank also stood out.

Set in Oregon in 1850, Seven Brides for Seven Brothers is the story of Adam, the eldest of seven brothers, who goes to town to get a wife. He convinces Milly to marry him that same day.

They return to his backwoods home when she discovers he has six brothers – all living in his cabin. Milly sets out to reform the uncouth siblings, who are anxious to get wives of their own. Then, after reading about the Roman capture of the Sabine women, Adam develops an inspired solution to his brothers’ loneliness – kidnap the women they want!

It’s 60 years since the film was released and 32 since it became a Broadway and West End musical. It’s an old favourite and this show has given it a new lease of life. The audience loved it. And a new young generation will fall in love with it as their parents and grandparents did. Slick scene changes, live music, I defy anyone to leave without a spring in their step and a song in their heart.

Join the hoe down and enjoy watching the brothers Goin’ Courtin. It’s on until Saturday 25 January.