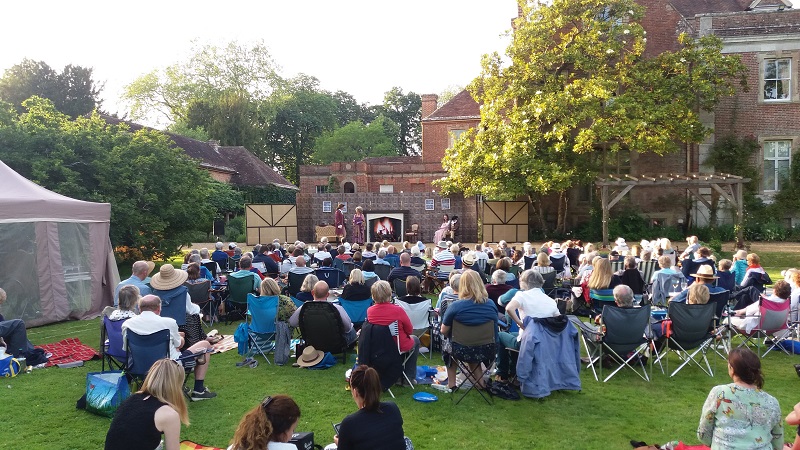 When it comes to putting on a brilliant performance in the most glorious of settings, Wimborne Drama Productions have nailed it. And the good news is that instead of having to wait another two years for the next one – they have promised to be back at the venue in 2020.The weather was extremely kind from Thursday 27 to Sunday 30 June giving the audience a chance to bask in warmth in more ways than one.The comedy by Oliver Goldsmith, first performed in London I773 raises questions of class and snobbery – but in a good way.Paul Dodman was very likeable as Mr Hardcastle, a wealthy countryman, who was very aware of his home’s inadequacies as it was to be mistaken for a country pub! You can always be sure that a part is in capable hands with Chrissie Neal, who encapsulated the status conscious wife and mother, Mrs Hardcastle.The couple wanted their daughter Kate (Michelle Barter) to meet Marlow, the son of a rich Londoner in the hope they would marry.Michelle virtually stole the show in the Steel Magnolias in Broadstone earlier this year, and once again she put in a stunning performance. As Marlow – played with skill by Sam Moulton – prefers lower class women, she had to affect an alter ego, to amusing effect.James Bourner clearly had a lot of fun as Kate’s dissolute step-brother Tony Lumpkin who enjoyed more than a glass or two with Tom Twist (Colin Pile), Jack Slang (Simon Jackson) and Dick Muggins (Tony Feltham) at the Three Pigeons.When it comes to cameo performances, you would have to go a long way to better the five servants – Diggory (Tony Feltham), Thomas (David Pile) Roger (Simon Jackson), Pimple (Judy Garrett) and Maud (Jane Stevenson). Their timing was perfect.Rob Cording-Cook as George Hastings and Bethany Barfoot as Constance, gelled well as would be lovers, with well-rounded performances by Gary Paine as Sir Charles Marlow and Russ Guillaume as Stingo the landlord.A triumph for director Richard Neal and his creative team.