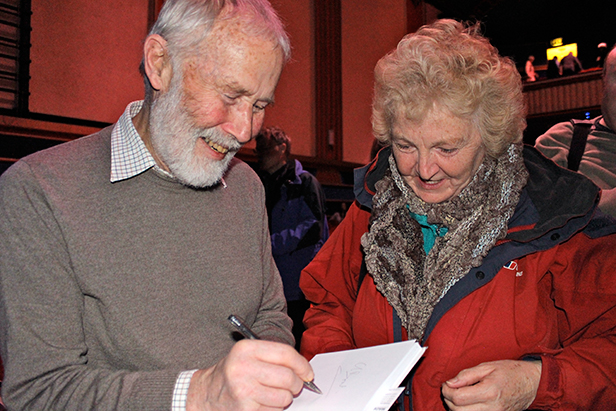 It was a privilege to listen to one of the world’s greatest mountaineers who started climbing at 16 and has never stopped. With the aid of film footage and photographs, the talk was a feat in itself because Sir Chris compressed his life into 90 minutes allowing us to relive with him some of his greatest achievements as well as some devastating moments.

It all started in 1951 when he persuaded a school friend to go with him to attempt Snowdon. Ill equipped, they hitchhiked to North Wales; Anton in his school shoes and Sir Chris in hobnail boots and wearing a mac his mother had cut short to look like an anorak. Totally inexperienced, the pair followed two men who seemed to know what they were doing. They were avalanched off the mountain and Anton went home, never to climb again. But Sir Chris was hooked. He’d found something he loved doing, went home and joined a rock climbing club and discovered he was good at it.

Through his working years, it was always the mountains that took precedence. He resigned his commission with the army to attempt Nuptse and ditched his job as a management trainee to write about climbing in the hope of making a living from mountaineering. His wife, Wendy, had no misconceptions about the man she married. Their honeymoon was taken in Wales in a tent on a mountainside.

He took the audience to Annapurna II in the Himalayas in the days when there was no tourist industry in Nepal. As part of the summit team, he remembered it as hard, awkward, mixed climbing, but a major achievement.

He recounted humorous tales like when Hamish MacInnes took him to attempt the North Wall of the Eiger. Chris was terrified. He wanted any excuse to stop  and convinced Hamish there was a front coming in. The pair turned back, Hamish muttering with disappointment, and they climbed Mont Blanc instead. Chris and Ian Clough later achieved the first British ascent of the Eiger’s North Wall with ease, which brought the media attention Chris needed to secure his future.

In 1966 he was filmed by the BBC climbing the Old Man of Hoy and was later commissioned to film expeditions in various parts of the world including the Himalayas.

Climbing doesn’t come without tragedy and several of his closest friends have been lost to the mountains and he paid tribute to them, including Ian Clough who died in 1970 on an expedition to climb the south face of Annapurna.

By that time, Chris was keen to make an attempt on the South West Face of Everest, but the mountain was fully booked. His opportunity came in 1975. He organised 10 climbers, 8 support members and 60 Sherpas. They made fast progress and it was Haston and Doug Scott who became the first Britons to reach the summit, checking in with Chris who was back at advance base camp. He showed the film of the emotional phone call and the audience listened intently to the crackly recording. Chris was not to reach the top of Everest until 1985.

Fun climbs and other adventures have filled his life for the last 30 years, including sailing with round the world yachtsman Robin Knox-Johnson to Greenland. He’s also climbed with his family and as you would expect, it wasn’t the local hills, but Kilimanjaro.

One of his proudest moments in recent years was carrying the 2012 Olympic torch up Snowdon – he actually went on the train, but was met by about 200 people who had walked up. He said it took him back to his roots. Four weeks later he returned to Snowdon with his family. An outing he remembers with poignancy because a few months later Wendy was diagnosed with motor neurone disease (MND). She died in July 2014.

Despite this personal and devastating loss – Wendy was his rock – Sir Chris achieved something incredible the following month. Aged 80, he climbed the Old Man of Hoy in aid of MND charities in memory of Wendy. It was an achievement most of us wouldn’t even dream of, let alone attempt at that age.

To sum it up, he said that mountaineering is about being out in front. Being completely alone in total concentration with everything shrinking down to a few feet of rock.

Maybe if we all concentrated on what we do at that level, we could all achieve our dreams.

It was an inspirational evening that received a deserving and long round of applause from a full house.