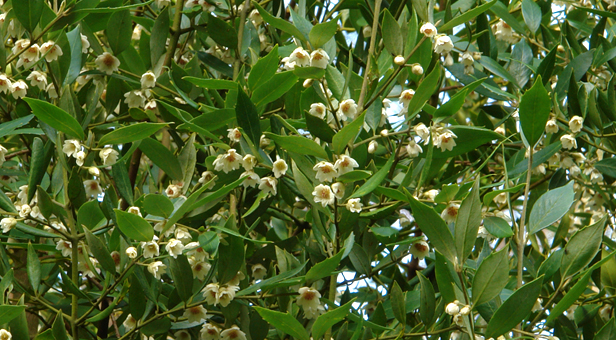 A rather unusual tree has just come into flower in Wimborne’s Knoll Gardens heralding the spring with its delicate scent and a mass of velvety cream flowers.

Not often seen in the UK, the Southern Sassafras, (Atherosperma moschatum) is a native to the warmer climes of Australasia. Having come into flower several weeks earlier than usual it would appear to be very much enjoying its sunny sheltered spot in Knoll’s free-draining sandy soil.

With shiny, serrated, evergreen leaves and a dense conical shape this unusual tree was also once renowned for its alleged medicinal properties, with the Victorians praising its virtues as an all round tonic, possibly due to the aromatic nutmeg-like smell of its crushed leaves.

Yet this particular specimen very nearly didn’t make it into the garden at Knoll. “When I took over in 1994 there were several plants looking rather sad at one side of the nursery which I very nearly threw out,” said Knoll’s owner Neil Lucas. “I realised just in time that some of these had belonged to the originator of the garden. He had a specific interest in Australasian plants so I knew it was something he thought worth growing.

“It turned out to be one of the first plants I actually put into the garden myself, and it has continued to reward me for my effort with thousands of tiny waxy flowers every spring.”

Also known as the Australian Snowdrop Tree, the Southern Sassafras is just one of many rare and unusual trees and shrubs to be found at Knoll Gardens. These now create a stunning backdrop for Neil’s modern naturalistic planting. It can be seen flowering now and usually retains its flowers for several weeks, weather permitting.