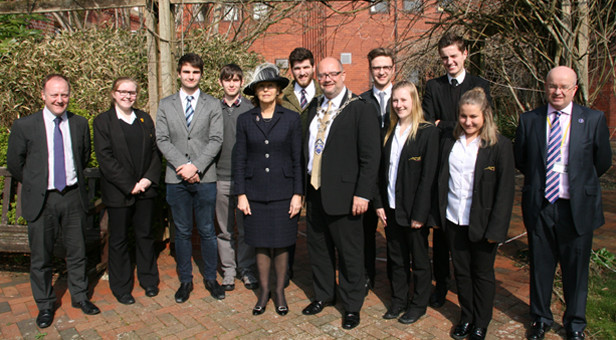 Students from Ferndown Upper School and Queen Elizabeth’s School, Wimborne have taken part in an exercise to help the Chairman of East Dorset District Council, Cllr Steve Lugg, decide on how to spend £1,000 of a ward budget.

The students, four from each school, were given the task of coming up with ideas on how best to spend the money to benefit the local community in the district. They put forward some initial ideas and were then invited to the council offices in Furzehill to discuss possible suggestions and agree between themselves on the winning idea.

The chairman and officers from the council were on hand to lend any advice. The High Sheriff of Dorset, Mrs Jennifer Coombs, also attended to find out about the project.

Ideas included a road safety initiative based around the Volvo LifePaint concept where cyclists’ clothes and bikes could be sprayed with a paint that is invisible during the day but glows white in car headlights.

Another idea was to do with promoting the ParkRun, which is held at Moors Valley Country Park every Saturday, while a third was for an art project that could be worked on by students from middle and upper schools to break down barriers between them.

After some debate, the students decided to incorporate two of these ideas by holding a night-time run at Moors Valley where runners could be sprayed with the LifePaint to promote the safety aspect of the product. The course would be lit so that the runners would glow in the dark.

A further project around the artwork idea would see students from middle and upper schools come up with different parts of a larger artwork. Each part could be displayed in public spaces in a different town in the district on a revolving basis before coming together to form the whole piece.

Cllr Steve Lugg said: “This was a very inspiring exercise and I’m very grateful for the hard work that the students undertook to come up with a decision in such a short space of time. This sort of event brings to life for the students the spending decisions which councillors have to make on a regular basis using the scarcer resources being allocated every year.”

Steve Collins, Enterprise Coordinator at Queen Elizabeth’s School, said: “This exercise has given the students an understanding of how they can have an influence on decision-making. You never know where some of their ideas may go in the future.”

Sarah Bird, Assistant Head at Ferndown Upper School, added: “This was a very real exercise in which they had to think deeply about what would make a good project. Although the students from the two schools hadn’t met before they worked together well to come up with great ideas. It shows that if you give students an opportunity they will fly with it.”