The Branch Lines of Dorset 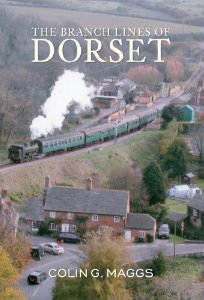 The branch lines of Dorset, shared almost equally between the GWR and LSWR varied from lightly built, rural railways carrying a low volume of traffic, to the Swanage branch, which at times carried main line express locomotives. Fortunately this line has been preserved and can still be enjoyed today.

The county had an unusual number of lines running to quays, two passing through streets for a mile and mingling with other traffic. One such was the Weymouth Harbour Tramway. Another branch served an oilfield.

All the Dorset branches are described in this absorbing and well-researched book.

Colin G Maggs provides a marvellously wide-ranging view of over 150 years of rail travel. Anecdotes of branch life and the people who ran them enrich the narrative throughout, including the story of the vanishing train driver…

This interesting book is illustrated with over 200 photographs, most previously unpublished and many from the author’s own extensive collection.

A highly respected authority on railways, having written more than 80 books about them as well as innumerable magazine articles, Colin received the MBE for services to railway history in 1993.