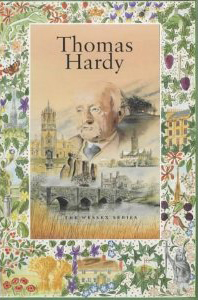 This colourful paper back, an updated version of an original 1997 edition, is a delightful potted biography of the life and works of the Dorset writer Thomas Hardy.

Thomas Hardy is loved for his writings of Victorian rural life even though he only covers the Wessex area.  There are maps of Hardy’s Wessex, with a list of where his fictional place names relate to actual names. Also a chronological list of his works from 1871 to 1921, diagram of his family tree and notes on the impact made on his writing by the places he lived including the family cottage at Higher Beckhampton and his home in later life at Max Gate in Dorchester.

Hardy was a great admirer of the renowned Victorian poet William Barnes and another chapter covers the Victorian rural life they both shared. Hardy referred to Barnes as the most interesting link between past and present life in Dorset’ although Hardy himself failed to admit to his own contribution to similar reminiscences.

A beautiful and charming book with comprehensive information that is easy to read and reference. Although short, it reveals the main interesting facts about a great and much acclaimed 19th and early 20th century writer.