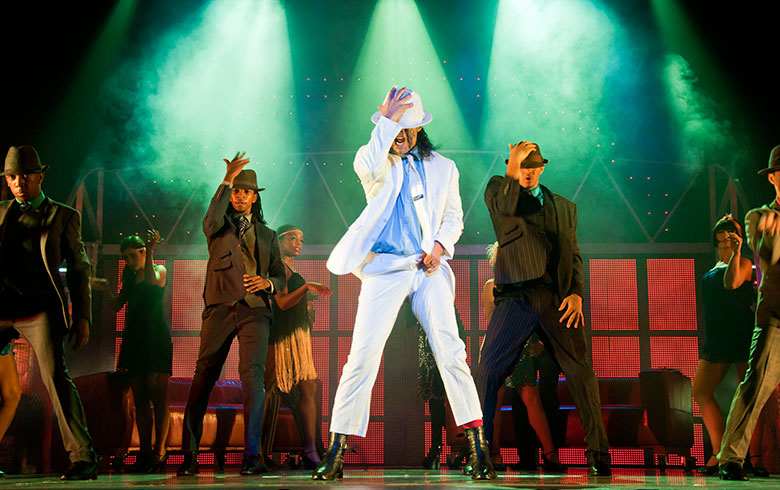 What a top tribute to Michael Jackson

Direct from the West End where it is now in its 7th record-breaking year, Thriller Live pulled out all the stops with high-energy entertainment, flashing lights, glitzy costumes, dance moves to amaze and even a few fireworks.

An early moonwalk, which was a true float across the stage, seemed to go unnoticed by the audience, but Billie Jean didn’t as the performers began to celebrate the man, the legend and the music.

A narrator told us about MJ’s early years to put us in the frame for ABC and Rockin’ Robin, but the narration seemed superfluous.

A few more of the oldies and a great deal of audience participation livened everyone up. No one escaped being involved because the performers had a way of making it happen.

Incredibly, hidden behind the stage lighting, a live band powered out the tunes and it was so cool to meet them when the screen rolled back.

With five singers sharing Michael Jackson’s songs, there was always going to be a judgment and top of my list was Rory Taylor, who was pretty much pitch perfect. When he sang Can You Feel It, I could and with psychedelic back lighting and everyone clapping, I think everyone else could feel it too. Same with Beat It. What great dance moves and a lead guitarist sharing the stage too – a double whammy.

Cleo Higgins threw herself into every song and was spellbinding in stunning costumes and incredible hair spiralling in all directions.

Earth Song was beautifully produced with plenty of emotion from all the singers helped by atmospheric lighting and screen shots of forests.

Outstandingly choreographed by Gary Lloyd, the show got better and better and then the moment everyone was waiting for arrived: Thriller. Eddy Lima who has clearly spent a lifetime studying MJ and mirroring his moves put on a spectacular performance.

At times the music was a little overpowering, but it didn’t matter and as the mist rose around the zombies a little shock was in store.

Then came an excellent Bad mash-up with everyone on their feet followed by Black Or White.

To be honest I did not want the show to end and it really seemed like the performers felt the same way. They put everything into Thriller Live to ensure that Michael Jackson, the legend, lives on. And I’m still singing ‘Can you feel it’.