The Swish of the Curtain Theatre Company 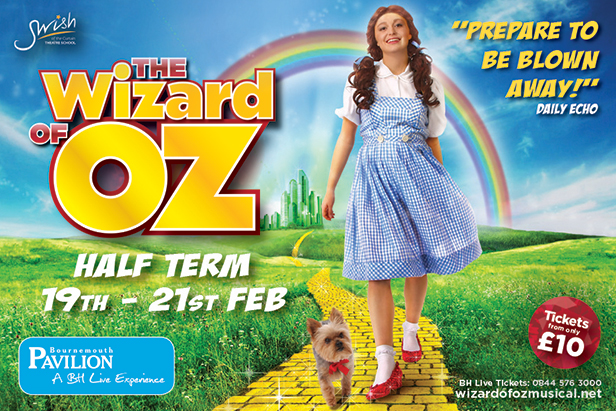 Easily rivalling the best West End performance I’ve seen, the Swish of the Curtain Theatre School and all the young people involved pulled off something truly spectacular.

Their production of the Wizard of Oz included outstanding costumes, scenery, singing and choreography.

My preconceived ideas of wind machines were soon blown away with brilliant technology that whirled the characters out of Kansas depositing them in the Land of Oz.

From then on the whole performance lifted off visually with a feast of colour. Costumes sparkled, Munchkins danced and sang and the audience clapped along with ‘Ding Dong! The Witch is Dead’ and other familiar songs. There were characters who flew gracefully on and off the stage, bubbles, foam (snow), strobe lights and pyrotechnics, making it a show full of surprises.

Word perfect Dorothy played by Sammy Toms had a convincing accent and looked uncannily like Judy Garland. Her little dog Toto (a Yorkshire terrier) was unflappable. And Dorothy’s three companions, the loveable and silly Scarecrow (Harvey Walsh who doubled as Hunk), the squeaky Tin Man played by Jack Howlett, (doubled as Hickory) and the Lion without any courage played by Ollie Slee (doubled as Zeke) were strong and vibrant characters. Their separate arrivals along the yellow brick road were completely absorbing, especially the stunning apple tree scene that concealed the Tin Man.

The willowy Wicked Witch of the West, Ellen Lewis, was all dark side and excellent with it, as were her ensemble of crows who flew with ease above the stage.

Not a moment passed when the cast weren’t giving their all, and enjoying it too. Their energy and enthusiasm was inspiring.

Though hard to single out any favourites, the Lion was an absolute scene stealer and the Jitterbug dance routine was exceptional. What a gift the director Tina Witham has along with choreographer Caroline Barnes and musical director Jonathan Prentice.

The Wizard of Oz by Swish of the Curtain Theatre School was a top class performance, no wonder it played to a full house and received a standing ovation.