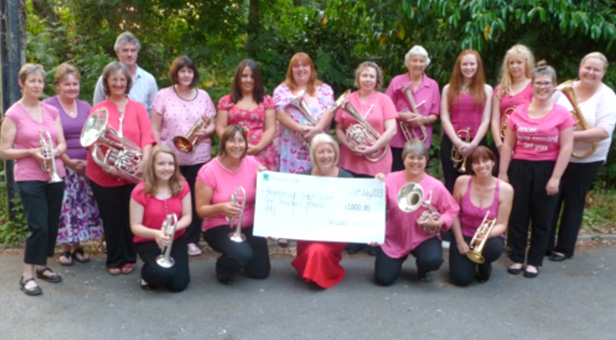 The ladies of Verwood Concert Brass recently formed an all female band, Blushing Brass, who played ‘in the pink’ to raise money for Breaththrough Breast Cancer.

Jan Tiller, the driving force behind the initiative commented, “I was inspired by the fund raising activity of another all female band ‘Boobs & Brass’ and thought we have more than enough ladies in Verwood Concert Brass to do something similar.”

Jan set to and with tremendous support from the band and sponsors and Blushing Brass held its first charity concert on 22 June.

Jan added, “I have never organised anything like this before so I really did not know how it was going to go but was over the moon that we were able to present a cheque for £1,000 to Breakthrough Breast Cancer as a result of our efforts. What’s more we had such great fun in achieving it.”

Jean Murray who accepted the cheque on behalf of the charity said, “Breakthrough Breast Cancer are delighted to have the support of the ‘Blushing Brass’ ladies whose recent concert raised a fantastic £1,000 for Breakthrough’s work! This money will allow us to continue fighting breast cancer by finding the cause of breast cancer, improving detection, diagnosis, treatment and services.”