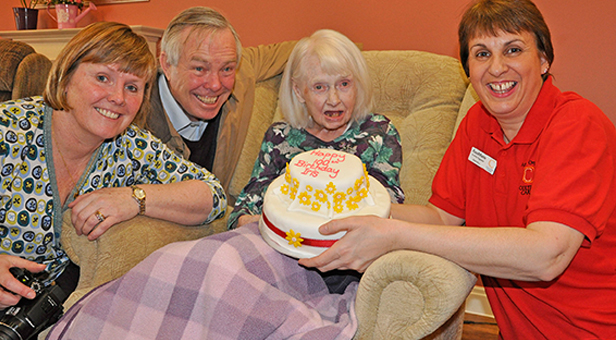 An elegant great-grandmother with a passion for fashion has celebrated her 100th birthday with family and friends.

Iris Brain was centre of attention as Colten Care’s Fernhill home in Ferndown held a party in her honour and presented her with a bouquet of flowers.

Fiona, who lives in Wimborne, said: “To me she has always been an elegant, well dressed grandmother keen to stay trendy. She’s had a love of dressmaking throughout her life, a real passion for turning fabric into clothes.”

Born in the Cornish town of Bodmin on the eve of the First World War, Iris and her family also lived in Parkstone, Exeter and Surrey as her father progressed his career as a railway goods agent.

In her younger days, as well as making clothes, she worked as a sales assistant at a ladies’ clothes shop in Guildford.

In later years, Iris enjoyed going to horse races and on cruises including a round-the-world voyage on the Canberra with her first husband Stanley. After Stanley’s death, she continued to travel extensively with second husband Geoffrey, a widower she met at a pensioner’s lunch.

After her only daughter Diana died in 2006, Iris moved into Colten Care’s Amberwood care home in Ferndown. She moved to Fernhill, a specialist dementia care home, in 2011.

Fernhill has a number of themed sensory rooms designed for reminiscence work including a haberdashery called Thimbles which gives residents the chance to handle textiles, ribbons, wool and threads for making clothes.