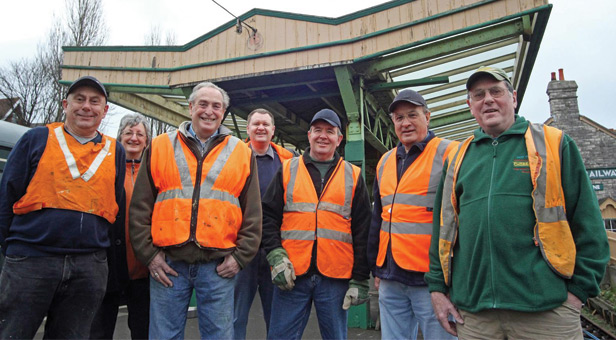 Dedicated volunteers are embarking on an ambitious £150,000 refurbishment of Swanage station’s 1930s canopy – 40 years after it came close to being demolished and replaced by a supermarket, hotel, public house and car park.

When the ambitious 12-week scheme is complete, it is expected the 254-feet long metal and wood platform canopy covering 5,000 square feet – and made up of 350 separate panes of glass – will not require further attention for another 50 years.

The impressive canopy was completed by the Southern Railway Company in 1938 when the station building was mostly rebuilt and greatly extended.

Work has started on stripping, restoring and repainting the platform canopy which will be repainted in authentic 1930s Southern Railway Company colours using a hi-tech paint used on North Sea oil and gas platforms.

The 350 glass panes are being replaced with new laminated safety glass, while the total number of glazing bars being replaced would run for almost half a mile along the railway line out of Swanage if laid out end to end.

Chairman of the volunteer-run Swanage Railway Trust, Liz Sellen said, “This ambitious project represents a once in a lifetime makeover with the Swanage station canopy celebrating its 75th birthday this year.

“The station canopy restoration project is being managed by Swanage Railway trainee fireman Nick Coram, and we have been fortunate that local contractors have offered excellent value for money and service which has enabled us to support the local Purbeck economy.”

Opened in May, 1885, Swanage station’s small Victorian platform canopy was rebuilt and extended in 1938 – along with the station building because more passengers were visiting Swanage on holidays and day trips.

Liz continued, “While the Swanage Railway has been based at the station since 1976, we have been so busy rebuilding and developing the seven miles of line back to the national railway network that this is the first chance that we have had to completely restore the station canopy.

“While the platform canopy was restored as best we could with very limited financial resources back in 1976 and 1977, since then we have only been able to repair the ravages that the salty sea air inflicts,” she added.

Currently closed for its winter maintenance shutdown, the Swanage Railway re-opens on Saturday, 16 February, so steam trains can operate daily over the school half-term week during which the canopy restoration work will be suspended.

Work on the station canopy restoration will then resume on weekdays only. The work is hoped to be completed by Monday, 25 March, 2013.