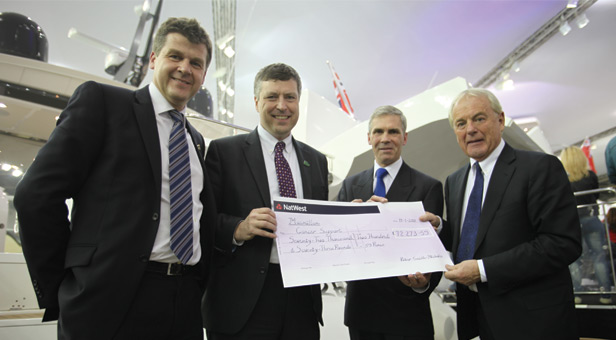 The London Boat Show was the venue chosen to announce the result of the 2012 Macmillan Dorset Bike Ride and launch the appeal for cyclists to take part in the 2013 event, which takes place on Sunday, 7 July.

On board the newly launched 68 foot Predator yacht, ride organiser Peter Smith-Nicholls presented a cheque for £72,273 to Macmillan Cancer Support’s chief executive Ciarán Devane. The amount raised in 2012 was significant as it brought the total raised by the event to £1 million since its founding.

Peter said, “When we started out all those years ago with such small beginnings it was a distant dream to raise £1 million. However with the backing of Sunseeker International in the last seven years we have now raised over £1 million in total.”

Receiving the cheque for Macmillan Cancer Support Ciarán Devane said, “I would like to congratulate Peter and the Dorset Bike Ride on reaching the incredible milestone of £1 million. Cancer is the toughest fight that many of us will face. The money raised by the Dorset Bike Ride means that more people can be supported by the Macmillan team. We are very grateful to Peter and his team for all their hard work and fantastic amount raised.”

This year will be another significant year for the charity cycle ride as it celebrates 25 years. Cyclists will be encouraged to sign up for a special 25 mile ride taking them through Charborough Park. The usual other rides will be on offer including the 10, 38, 48, 60 and of course the Macmillan Dorset 100 mile challenge ride. Joining Peter at the presentation were Operations Director Wayne Moore and Group President of Sunseeker International Robert Braithwaite. Wayne commented, “Sunseeker are delighted to be associated as official sponsor with the Dorset Bike Ride once again. Macmillan Cancer Support is an excellent charity and their teams do a wonderful job to help sufferers and their families in many ways. The ride gives an opportunity for anybody to take part in a great day in a beautiful part of the country while raising money for a very worthwhile cause.”