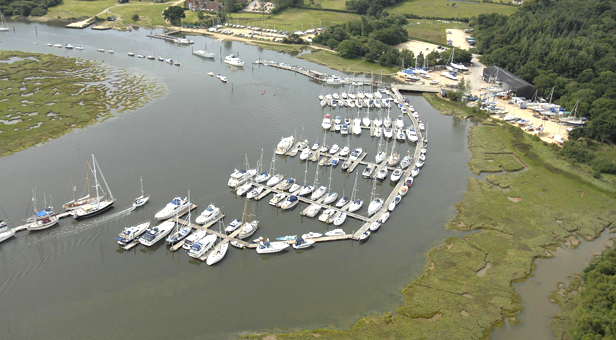 Buckler’s Hard Yacht Harbour, set on the Beaulieu River, in the heart of the New Forest National Park, is one of the most attractive locations on the South Coast.  Following a rigorous assessment of the marina by The Yacht Harbour Association last year, it was awarded the top rating of 5 Gold Anchors.

The Beaulieu River is one of the few privately owned rivers in the world, forming the south-eastern edge of the Beaulieu Estate and close to the sailing centres of Cowes, Lymington and Hamble. The custodianship of the river by one family, over five centuries, has ensured that riverside development and the number of moorings have been carefully controlled.  The result is a river that is largely unspoilt, both in terms of its landscape and as a haven for wildlife.

Harbourmaster, Mike Nicholls, manages the marina with a team of enthusiastic staff and is responsible for all activities on the river, from the mouth at Lepe to the Mill Dam at Beaulieu. Mike is a professional skipper and has almost 40 years of experience on the river, which for many years has been looked on as the gem of the Solent.

Russell Bowman, Managing Director for the Beaulieu River says, “The Beaulieu River is one of the most picturesque locations on the south coast and its yacht harbour has a long track record of giving a very personal and outstanding service to its customers.  We are delighted to have this recognised with the 5 Gold Anchors award.”

With 115 marina berths, over 300 moorings and a boat park with slipway, this is a fully serviced marina offering a boat yard, fuel and valet service.  The shower facilities have recently been refurbished and there are now provisions on sale for the convenience of mooring holders and visitors.