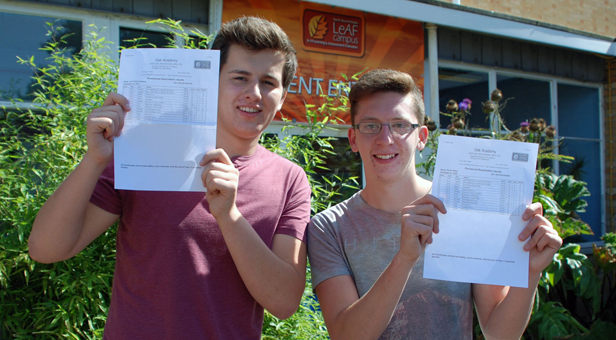 The Oak Academy – LeAF Campus has seen almost 100 percent of its students achieve five A* to C grades at GCSE.

In total, an impressive 97 per cent have come away with at least five GCSEs at A* to C grades.

Leila Heshri, scored an impressive one A*, four As and three Bs. She said: “I am very happy with my results and will now go on to do my A-levels, and hopefully go on to University after that.”

Executive principal of the LeAF Academy, Dr Annetta Minard, said: “To have almost every single one of our students come away with at least five top grades is testament to their hard work and determination.

“And 100 per cent of our students have achieved at least one qualification.”

The school has released a provisional figure of 46 per cent of students achieving at least five GCSEs at A* to C, including English and Maths.

Results are still being analysed and some papers are expected to be put forward for remarking.

Caption: Oak Academy students Lee Bowers (left) and Kyran Arthur (right) each received four Bs and six Cs and will go on to study A-levels in gthe sixth form at the Oak Academy