A Royal returns for the Dragon World Championship 2013 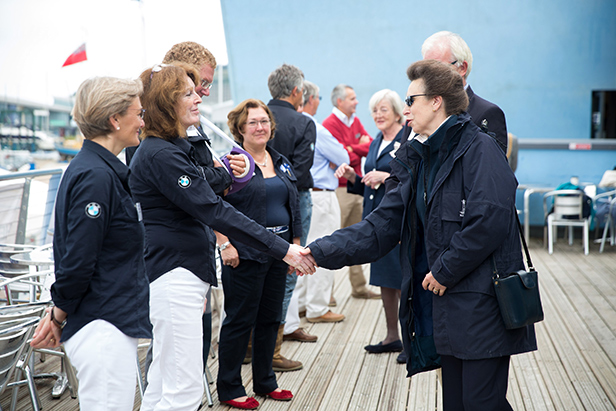 Her Royal Highness The Princess Royal at WPNSA © Michael Austen

Her Royal Highness The Princess Royal visited the Weymouth and Portland National Sailing Academy (WPNSA) by invitation from the British Dragon Association for the Dragon World Championship on Thursday 12 September. She is the patron of this World Championship in recognition of the association of the Royal Family with this class of racing yacht.

The Academy was delighted with her visit and relished the opportunity of being able to show Her Royal Highness the London 2012 Olympic Sailing Venue once again.  She officially opened the Academy in 2005.

An enthusiastic sailor, who has sailed from an early age and gives a significant amount of her time to the sport through her role as President of the Royal Yachting Association, Her Royal Highness The Princess Royal spent a very enjoyable couple of hours watching the Dragon World Championships (hosted by the WPNSA). She was accompanied by Martin Makey, Chairman of the British Dragon Association, Peter Allam, Chief Executive of the WPNSA, Stacey Clark, Chairman of the RYA and guests.

Peter Allam, the newly appointed Chief Executive of WPNSA commented, “We were delighted to welcome Her Royal Highness The Princess Royal back to the Weymouth & Portland National Sailing Academy as Patron of the 2013 International Dragon World Championships. We are very grateful for her continued support and recognition of Weymouth & Portland as a world-class sailing venue.”