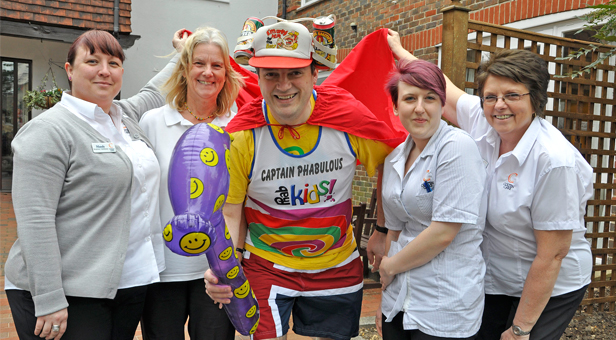 Everyone loves a superhero – at least that’s the hope of one care home activity organiser in Bournemouth ahead of the 2013 Virgin London Marathon.

By turning into his alter ego of Captain Phabulous, Brian Knight hopes to raise as much money as possible for two Dorset charities.

Brian, who works at Colten Care’s Avon Cliff nursing home in Christchurch Road, will run the 26.2 mile route on Sunday 21 April in a red cape and ‘lucky’ beer can hat.

A veteran of 11 marathons, he will also carry a ‘happy hammer’, a friendly plastic club which will help to draw further attention.

Brian said: “It’s a deliberately eye-catching outfit but I don’t have any beer in the cans. They are just there to remind me of the drink I’ll have at the end of the race. I’ll certainly need it. You only ever ache in two places after a marathon – your top half and your bottom half!”

Captain Phabulous is named after the Poole and District Phab Club, which promotes the social integration of physically disabled and able-bodied people. Brian has been chairman since 1995 and a member since 1981 when he was introduced to the club by a disabled relative.

The second organisation to benefit is Avon Cliff’s nominated charity of the year, the Dorset children’s hospice Julia’s House.

Avon Cliff Home Manager Raine Chambers said: “As an activity organiser, Brian puts a great deal of effort into helping our residents enjoy themselves through what is a very busy schedule of events and activities inside and outside the home. His participation in the marathon is further proof of his boundless energy and we all wish him the best of luck.”

Brian, who lives in Poole with his wife Debbie, raised £4,500 in his last London Marathon in 2010 and said he hopes to do even better this year.

He added: “Everyone at Avon Cliff is being very supportive and I have had lots of cash pledges from colleagues. It’s great to know people are behind you with their donations.”