Ainslie praises WPNSA as the Academy looks back 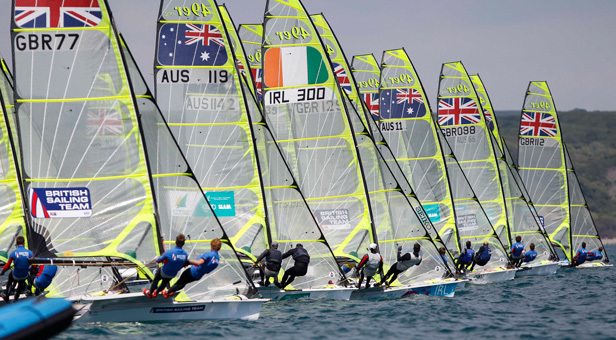 Now that the Olympic legacy is in full swing, and first anniversary celebrations are taking place, the Olympic and Paralympic Games venue at the Weymouth and Portland National Sailing Academy (WPNSA) is taking a look back to reflect on the pre games training and preparation which enabled the British Olympians to compete on a global level.

The Academy was able to assist in the preparation of Olympic sailors and played a crucial part in the overall success of the London Olympics 2012 and the British Sailing Team’s impressive medal haul of two golds, four silvers and a bronze. (five Olympic and two Paralympic).

One gold medallist, Sir Ben Ainslie CBE, was a frequent visitor to WPNSA whilst undertaking his Olympic training at the now iconic venue. He said, “WPNSA is home to some of the best sailing waters in the world and there is tough competition to gain this status. The highest profile sailors in the world have competed at WPNSA and the venue itself has showcased one of the most watched global events.  I have sailed on these waters since I was racing youth classes and the WPNSA is a great improvement upon the facilities I used back then.”

He added, “The new generation getting out on the water have a very bright future and a first rate sports venue readily available to them that represents such a great opportunity. I have no doubt the venue will go on to host a raft of quality sailing events as it is now firmly on the map as a premiere location to compete. Personally I will never forget winning my Olympic gold medal in front of a home crowd and on waters so familiar to me.”

Now also a member of the Board of Directors for the WPNSA, Ainslie will continue to play a role at the centre that supported him throughout his sailing career and Olympic campaigns.  He is not the only gold medallist to sing the praises of the Weymouth and Portland National Sailing Academy, as Paralympic Gold Medallist Helena Lucas MBE also trained from the Academy for a number of years before and during her campaign. Lucas won gold in 2012 in the 2.4mR event.

Lucas said: “Winning gold on home waters in Weymouth and Portland was an amazing experience, the home support is something I will never forget and it spurred me on tremendously. Training and competing at WPNSA throughout my preparation certainly contributed to my result and I will always love sailing here. The Weymouth and Portland National Sailing Academy is an unbeatable venue for disabled sailors with new, purpose built, facilities. For example, there are disabled access hoists on the pontoons, providing the safest access to tidal waters for people with disabilities anywhere in the UK. I don’t know of any other sailing venue where the needs of sailors of all abilities are so well catered for.”

Sir Ben Ainslie CBE and Helena Lucas MBE are two sailors who will now be forever known as champions in their sport; they both praise the WPNSA for the quality of its facilities for disabled and able bodied sailors and the fantastic waters that surround the venue.

Nevertheless, it was not only Team Great Britain who performed outstandingly during the sailing Olympics and Paralympics; with competitors from across the globe winning medals in British waters. A key to the success of both the British Olympic and Paralympic sailors and the international sailors was the ability for them to access and train in the Olympic waters before the Games began; reaping the benefits of this  advantage. The Weymouth and Portland National Sailing Academy was the first Olympic sailing venue to open to international competitors prior to the Games since Kiel in 1972. By operating in such a way (the WPNSA was completed in November 2008), this created a level playing field for competitors, with the final sailing competition higher than ever.

During this period WPNSA hosted sailors from Italy, USA, Canada, Australia, Spain, Sweden, Holland, Argentina, Denmark and Russia to train pre Games. Having these teams on site, some of which were for a number of years prior to the Games, brought a great international feel to the Academy and the wider Weymouth & Portland area.

The Australian Olympic Sailing Team commented: “We spent a lot of time at WPNSA in the years leading up to the Olympic Games. The ability to train from and familiarise ourselves with the Olympic venue as we prepared for the Games was a definite plus. The setup there was great and easy to operate from, the facilities are second to none in the UK and the people were always friendly and helpful.”

The WPNSA played an essential part in training and assisting all Olympic and Paralympic sailors in both the 2012 Games and in the years leading up to the event. It could be said, that without the Academy, the British Sailing Team may not have achieved such admirable results.