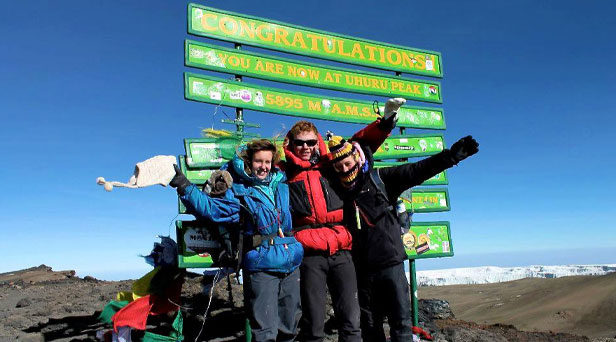 A student from Sherborne Girls in Dorset has raised almost £5,000 for the charity Regain by climbing Mount Kilimanjaro.

Ella Mountbatten endured gale-force winds and temperatures of -15C during her six-day climb, along with her father, cousin and friend.

“It was exhilarating to make it to the top and touch the sign, and thrilling that I was the first person in our group of 27 climbers to reach Uhuru Peak at 5,895m. I can now say I climbed to the top of the highest  free-standing mountain in the world!

“Although I didn’t get altitude sickness quite as badly as some of the others, the lack of air made even the simplest thing, even turning over in bed, a lot harder, and I found myself breathing as if I’d just run a 100m sprint. There were also 40-mile- an-hour gale-force winds to contend with, and the last eight hours of gradual trudging were horrendous, as my camel back and water bottle both froze. But it was one of the most incredible things I have ever done and I am really pleased I had my father there to spur me on.”

All the money raised will go to Regain, a charity which aims to improve the independence of British men and women who have become tetraplegic as a result of a sports or leisure injury