Air Ambulance attends over 600 incidents in 2012 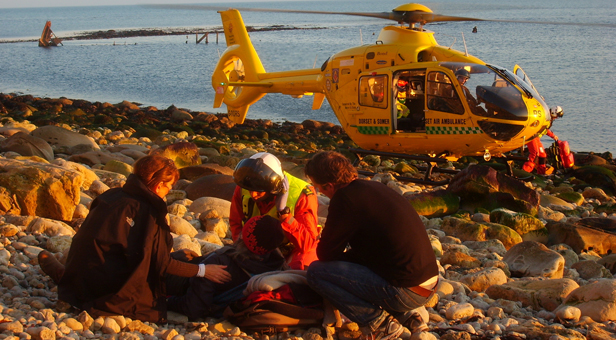 Dorset and Somerset Air Ambulance has confirmed that the air ambulance attended 615 incidents last year and has now flown over 9,000 missions since its launch in March, 2000.

Of the incidents attended in 2012, 323 were in Somerset and 279 took place in Dorset with the outstanding number being on the borders of Avon, Devon, Wiltshire and Hampshire.

The busiest month of the year was August with 72 call-outs, followed by July with 62 emergencies.  The busiest day of the week was a Saturday.

Of the 615 incidents attended, 280 were of a medical nature, 125 were road traffic incidents and 108 patients were treated with trauma symptoms.  Dorset and Somerset Air Ambulance attended 96 sporting or leisure incidents with 47% being of an equestrian nature.  The outstanding number of mission’s flown were hospital transfers totalling six.

Of the patients flown to hospital, 25% were taken to Dorset County Hospital in Dorchester, 21% to Musgrove Park Hospital in Taunton and 18% to the Royal United Hospital, Bath.  Frenchay Hospital in Bristol received 12% of patients, Southampton General Hospital 6% and Poole General Hospital 5%.  Others were flown to Royal Bournemouth, Royal Devon & Exeter, Salisbury District, Swansea, Weston General and Yeovil Hospitals.

DSAA Chief Executive Officer Bill Sivewright said, “Every one of the missions we fly is the result of somebody suffering a potentially life-threatening injury or accident.

“We have helped to save countless lives over the years because we can reach any part of the two counties in 19 minutes and we know that patients who receive treatment within the first hour – the ‘Golden Hour’ as it’s known – have a much better chance of survival.

“The 615 incidents that we attended during 2012, clearly demonstrates the need for our Air Ambulance. The funds raised by the people of Dorset and Somerset have, of course, been vital to delivering the service and we are grateful to them for their generous support.

“We rely entirely on donations to raise the £4,000 a day it costs to keep our helicopter flying and we do not receive any direct Government or National Lottery funding.

“Without the support of individuals, businesses and organisations throughout Dorset and Somerset, we simply could not keep going.”

The Dorset and Somerset Air Ambulance is organising a major fundraising event this year to raise funds. The third annual Coast to Coast Cycle Challenge takes place on Sunday, 19 May 2013.  The 54 mile cycle begins at Watchet Harbour (Somerset) and ends in the Dorset town of West Bay. In only 46 days, over 450 entries have been received.  With only 600 entries available, the charity is expecting this to be a sell out and is encouraging people to enter as soon as possible.