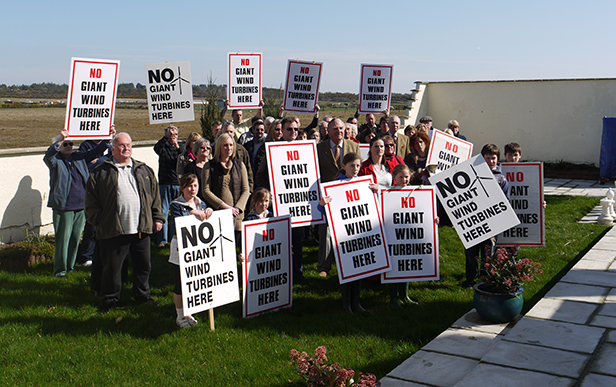 DART (Dorset Against Rural Turbines) has announced that one of its members has taken the High Court decision to approve the Alaska Windfarm to the Appeal Court.

The planning application is for four industrial turbines – taller than Salisbury Cathedral – high on a ridge at East Stoke, near Wool where they could be seen over most of Dorset.

The application was initially democratically rejected by Purbeck District Council because there was no way that the giant turbines could be screened, and the Windfarm was next to the year round Dorset Scout Camp. This was overturned by a Government planning inspector.

After evaluating the case, the Appeal Court has agreed that there is justification for the appeal to be heard.

“Our battle has been going on since August 2007,” said Terry Stewart from Dorset CPRE. “We are fighting to protect the Purbeck Area of Outstanding Beauty and the beautiful Dorset landscapes.”

Geoff Edwardes, Chairman of DART, explained that on the Continent no turbine was allowed within 1,500 metres of a house because of the turbine noise and visual impact: “Yet this proposed windfarm is within 500 metres of the Scouts’ tent area that is used throughout the year,” he said. “We produced a national medical expert who stated that turbine noise can damage human health.”

Although quietly optimistic about the appeal, Terry Stewart says, “These legal things are never sure.”