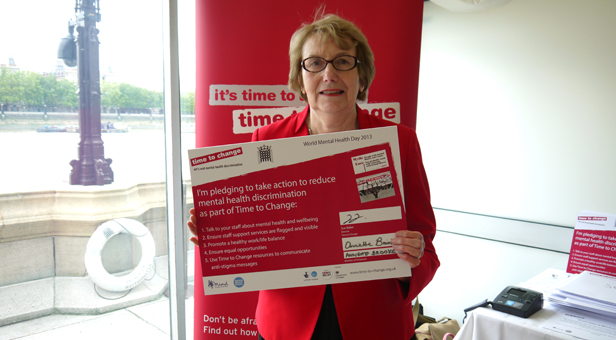 On World Mental Health Day (Thursday 10 October), Annette Brooke, MP for Mid Dorset and North Poole, signed a pledge with Time to Change, the mental health anti-stigma programme The pledge is a commitment by MPs in their roles as small employers to address mental health stigma and discrimination, and support mental health and wellbeing among their staff.

The pledge signing took place at an event in Parliament where Annette joined colleagues from across the political spectrum in making a public statement that they will talk to their staff about mental health and wellbeing, ensure support services are flagged, promote a healthy work/life balance, ensure equal opportunities and use Time to Change resources to communicate anti-stigma messages.

Annette said: “Unfortunately nine in ten people who have a mental health problem will experience stigma and discrimination. It’s so important that anyone going through a difficult time is able to speak out without fear of being judged, which is why I’m supporting Time to Change and committing to make my workplace stigma free.”

The event was also an opportunity to celebrate the significant landmarks in the work Parliament has done in the last 18 months to address stigma and discrimination. These include the passing of the Mental Health (Discrimination) Act, which put an end to archaic laws that discriminate against people with mental health problems, and four MPs disclosing their mental health problems in Parliament for the first time ever last year.

Some of the most influential figures and organisations in politics and finance have signed the pledge this week including the Bank of England, the Financial Conduct Authority and NHS Employers. They join other major organisations including British Gas, BT, Lloyds Banking Group, Ernst & Young, EON and Pepsico.

Sue Baker, Director of Time to Change, said: “We are seeing unprecedented support from many different industries which now see the importance of tackling mental health stigma and discrimination. Through this parliamentary event we hope to encourage MPs, as small employers in their constituencies, to think about the measures they can put in place to ensure that their workplaces are stigma free. In the last year and a half, we’ve seen huge improvements in the way that mental health is perceived in Parliament and among the public as a whole.  But we can’t lose momentum – the events of recent weeks have shown that there is still work to be done and we hope today’s pledges, from individual MPs through to the Bank of England, will help to embed the anti-stigma movement further throughout society.”