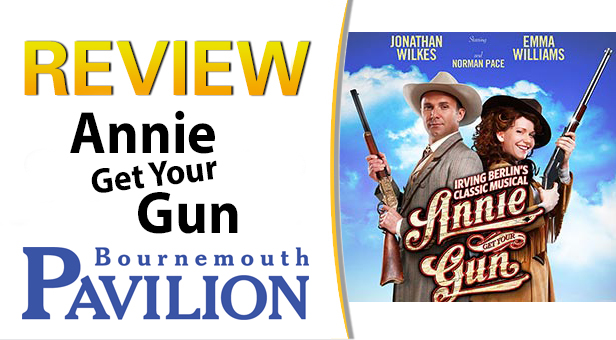 You can’t help but love Annie Get Your Gun.

With a score packed with classic hits from Irving Berlin, this musical is from a time when technology was not king. You can’t imagine Miss Saigon, Les Mis or Charlie and the Chocolate Factory without the electronic wizardry that seems to be as important as the scores these days.

But in Annie Get Your Gun, the audience is taken back to a time when the songs and the dancing were enough to fill the theatre and sell out the West End.

It’s a simple story really. When Buffalo Bill’s Wild West show comes to town, it only takes one glance for sharp-shooting country girl Annie Oakley to fall head over heels for its star marksman, Frank Butler. Both have truly met their match, revealing their competitive natures as they vie for best shot – and each other’s hearts. I’m not really giving anything away when I reveal that there is the happy romantic ending that you’d expect in a classic – no big surprises here. But the standing ovation the cast received at the end of the opening night shows that sometimes simplicity is what people want.

Based inside a big top, there are no scene changes, just a clever use of props to create the different settings.

Emma Williams is magnificent as Annie Oakley with her superb singing voice note perfect – incidentally it was longest holding of the note in Anything You Can Do that I’ve ever heard.

Jonathan Wilkes as Frank Butler casts his spell over the audience as well as love-sick Annie and Norman Pace is a convincing Buffalo Bill.

Ed Currie’s portrayal of Chief Sitting Bull adds comedy to the production with the excellent dancing, singing and live music from an on stage orchestra ensuring that everyone in the audience has fun.

There is memorable music – No Business Like Show Business is repeated throughout the performance and favourites such as The Girl that I Marry and Doing What Comes Natur’lly are popular.

This is good old fashioned musical fun. It might appeal more to older audience members but will be another hit in a summer season which has brought both variety and quality for all ages to the Pavilion Theatre.