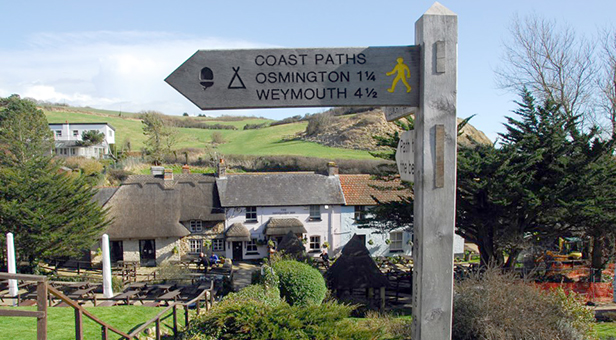 Badger ales is delighted to be helping the South West Coast Path Association to celebrate its 40th anniversary in 2013, by sponsoring the Lulworth Cove to Osmington Mills section of the walk and submitting a team to walk it on Friday, 5 April 2013.

As part of the day Badger ales will also be sampling three of its most appropriately named ales, Tanglefoot, Hopping Hare and Golden Champion, at The Smuggler’s Inn at Osmington Mills between 10.30am and 3pm and running a tag and brag competition on its Facebook page facebook.com/Badger.ale to help promote the walk. The competition will run between 29 March and 8 April. Everyone walking the route is invited to take photos along the Coast Path and upload them to Facebook.

Commenting, Badger Brand Manager Anna Corbett said: “We are delighted to be supporting the South West Coast Path Association and taking part in such a special event to help celebrate its 40th anniversary this spring. It is great to be working with other organisations such as the National Trust, County Councils and Areas of Outstanding Natural Beauty teams to ensure this spectacular coastline remains open for many years to come.  We know that Badger drinkers are often very keen walkers, so we are hoping that many people will come and join us and enjoy a sample or two of our ales when they’ve completed the walk.”

Described as ‘walking at its most diverse, most spectacular and most delicious,’ the South West Coast Path is the only hike in the UK to make it into Lonely Planet’s Great Adventures guide book and one of 12 hikes identified across the globe. For the adventurous, the 630 miles of Coast Path is the walk of a lifetime, taking in breathtaking heritage, wildlife, geology and scenery along the way, from Minehead in Somerset to Poole in Dorset.