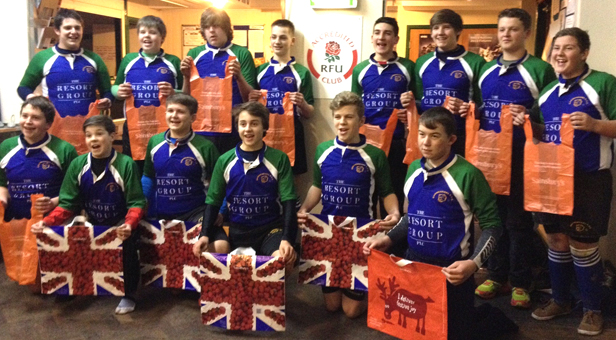 A squad of 27 boys from Oakmedians RFC’s Under 14s rugby team plus their coaches were delighted to be given the opportunity to help shoppers at Sainsbury’s in Alder Road, Parkstone to pack their bags. Six hours later they had raised over £1000 to boost their team funds and support the family of a fellow club member who lost his life last year in Afghanistan.

The Under 14s’ assistant coach, Matt Spiller, organised the fund-raiser, with the kind support of the store manager, Gordon Silvester and Adrian Wheal PR ambassador for Sainsbury’s.

Matt commented, “The spirit and generosity of the customers was outstanding, our coaches and players were thrilled to help so many kind and friendly people who embraced the spirit of the event, it’s great when local community clubs and local businesses pull together to raise money for their local community.”

The fund-raiser was a great success for the team who then went on to win 51-0 the next day against Lytchett Minster RFC in the semi-finals of the County Plate.

The team will be donating 50% of the monies raised to the wife and son of Sergeant Luke Taylor, who served and lost his life in Afghanistan in 2011, and was a player and member of Oakmeadians RFC in Meyrick Park.

Oaks said a huge thank you to Sainsbury’s and their customers for supporting them so generously.

For more information on how you can support Oakmeadians RFC or make a donation to one of their chosen club charities, please visit www.oakmeadians-rfc.com