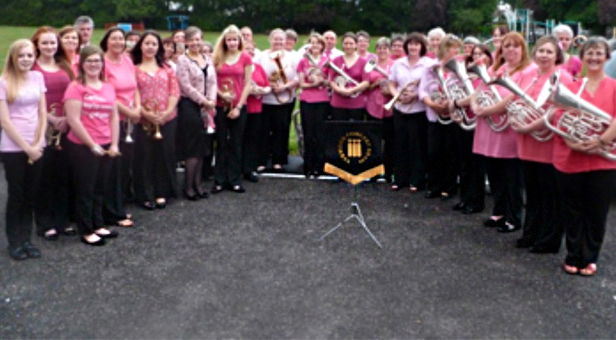 When Blushing Brass took to the stage at Verwood Memorial Hall on 22 June to perform a charity concert it was a sight to behold.

With the players bedecked in pink, the audience were treated to a wonderful programme of music, whilst having waiters serve refreshments at their tables.

Made up entirely of ladies, the 32 players, mainly Verwood Concert Band members plus a few friends playing in support, got together to raise money for Breakthrough Breast Cancer and band funds.

The mastermind behind the project was long time band member Jan Tiller. She said, “I was inspired by the charitable fund-raising achieved by a group call ‘Boobs & Brass,’ a brass band made up of ladies from all over the UK who have raised over £100,000 since 2006 to fight breast cancer by performing charity concerts.”

Verwood Concert Brass has 80 players, about half of whom are ladies, so Jan thought it would be a good idea to get them together to form Blushing Brass and try something similar in aid of charity. The band moved the idea forward and when renowned brass band composer, Derek Broadbent of ‘The Floral Dance’ fame got to hear about the venture, he composed and donated a piece. ‘Easy on the Eye, Easy on the Ear,’ received its premier performance by Blushing Brass to great applause.

Will Blushing Brass perform again? Verwood Concert Brass would not confirm, but a spokesperson said, “How can it not?”

The next Verwood Concert Brass performance (including its male players) is on Saturday, 6 July at the Hub, Verwood. Tickets £8