Bournemouth Arts by the Sea festival opens this weekend 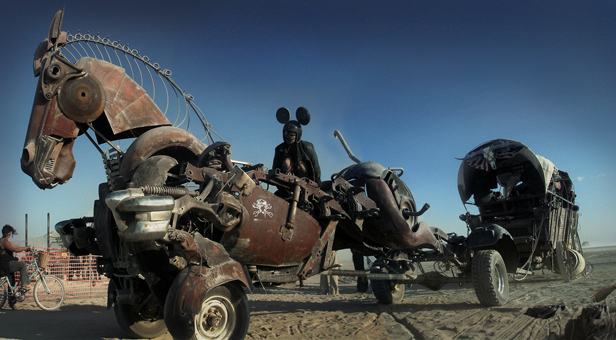 Don’t miss the grand opening weekend of Bournemouth Arts by the Sea Festival on 20-22 September. It’s headlined by Joe Rush’s Mutoid Waste – giant articulated vehicles and machines parading the beach, while over the following three weeks audiences will be able to experience a host of special events and performances.

Of the glittering range of Festival events, Carol Maund, the Festival Director says, “Over the past two years audiences have been brilliantly supportive of Bournemouth Arts by the Sea Festival. We think this is going to be the best to date with something for everyone to enjoy within our rich and varied programme. I hope you’ll agree and that we’ll see as many of you as possible at the Festival.”

Here’s a flavour of what’s on offer: at Pavilion Dance on 24 September, The Girl & the Shoes from Valise Noire Storytelling Theatre is an enchanting new children’s fairytale which draws on timeless classics such as The Wizard of Oz and Cinderella, to explore what happens when you put on magical shoes.

In contrast, on 27 September at the Shelley Theatre there’s a part séance, part avant-garde cabaret from Electronic Voice Phenomena, an experimental literature performance and music show. Or for a more relaxed form of entertainment you can join the Grand Tea Dance taking place at the Pavilion Ballroom on the afternoon of 9 October.

Film and music fans won’t want to miss such treats as special showings of Alfred Hitchcock’s early films restored by the British Film Institute, accompanied by live music from the Bournemouth Symphony Orchestra; The Dodge Brothers accompanying the classic silent movie Beggars of Life, plus a welcome return of Indy band British Sea Power accompanying the 1934 docu-drama Man of Aran.

Bournemouth Arts by the Sea Festival is funded by Bournemouth Borough Council and an Arts Council Grants for the Arts award. Headline sponsor is Arts University Bournemouth. The Festival runs from 20 September to the 12 October, with a free weekend of outdoor arts during the first weekend. For the full programme and more information about locations and tickets visit www.artsbournemouth.org.uk