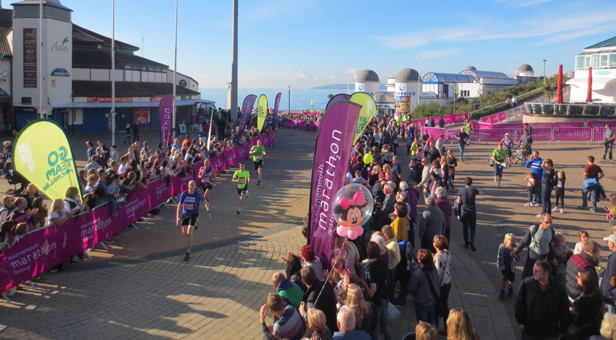 It formed part of the weekend’s running festival, created a 100+ road closures, and included junior races on the Saturday.

West Moors runner Mike Stevens took part in his first half marathon with his friend Lee Oxford. They were the early birds – the race started at 8am Sunday morning before the 10k race. Mike’s success raised an extra £200 for charity. He finished in 1h49m.

And Bournemouth woman, Catherine Kendrick jubilantly completed her first marathon. She said, “Three thousand people lined up at the start. It was cold at first as we huddled in Kings Park but as we ran over the start line the sun came out and it was beautiful sunshine throughout the run.

“The 13 mile stage was hard as the sun was very hot and there were people suffering with dehydration. The next challenge was the BIC hill which was draining, especially 18 miles in, but we were dished out with gels for a well needed burst of energy at the top.

“When we reached the beach again, there was a welcome breeze up to sandbanks and Shore Road all helped along by cheering crowds. It was an emotional moment as I crossed the line and completed my first and Bournemouth’s first ever Marathon. I did it.” She completed in 4h40m.

Her husband David added, “I am very proud of what she achieved. I know how hard she has trained, so was glad she achieved her goal.” He cycled the route offering his support.

Next year’s running festival will take place on 4 and 5 October 2014.