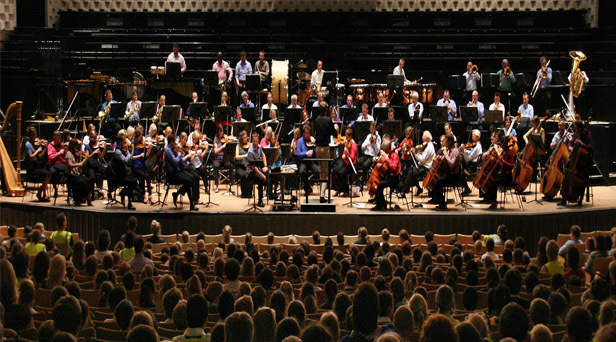 Around 4,000 local children fell under the spell of Bournemouth Symphony Orchestra in a series of concerts for schools held at Lighthouse in Poole.

The hour-long performances, under the baton of the BSO Young Conductor in Association, Maxime Tortelier, took them on a whistle-stop tour around the world of music, finishing back in England with the magical theme from the Harry Potter films.

The young primary-age audience was drawn from schools across the geographical county of Dorset and the New Forest.

Branksome Heath teacher Hannah Lewis explained, “We are very grateful to the BSO for giving the children this fantastic opportunity to experience live music, something which might not be open to them otherwise.

“Music plays a big part in our school. It promotes togetherness, teaches the children to listen and helps them to develop empathy.

“We all teach music to our own year groups and the children can learn to play the guitar, drums and recorders.

“We are very lucky to have the BSO on our doorstep and for this wonderful experience. It puts a smile on the children’s faces and I hope the concert will inspire them to pick up instrument.  It certainly makes me want to go and play my violin.”

There were certainly smiles on the children’s faces as Paul Rissmann, the BSO’s Children’s Composer, their exuberant guide, explained the story behind each piece before it was performed and invited them to use their imaginations to identify the themes and characters as the music progressed.

The young audience was pin-drop quiet as a solo flautist led the orchestra into Ravel’s ‘Bolero’. But there was an enthusiastic ‘yee haw’ to set the musicians off at full gallop into Aaron Copland’s fast and furious ‘Rodeo’.

The haunting notes from a conch shell heralded Australian Peter Sculthorpe’s ‘From Oceania’ before Rimsky-Korsakov’s ‘Sheherazade’ whisked the children to the Middle East for the musical interpretation of the ancient Arabian story ‘A Thousand and One Nights’.

School teachers had attended a Continuous Professional Development session where Paul went through the participation song ECO guiding them through the words and the body percussion. They then went back to school to teach the children so that they could sing along during the concert. The lyrics were based on how to save the planet, composed by Paul Rissmann. “Try walking to school, cos traffic’s not cool,” they sang.

Then an animated film accompanied Candide by Leonard Bernstein before Harry Potter brought the concert to a close.

Since 2007, around 28,000 children have attended the schools concerts organised by BSO Resonate, the orchestra’s award-winning Education and Community team.