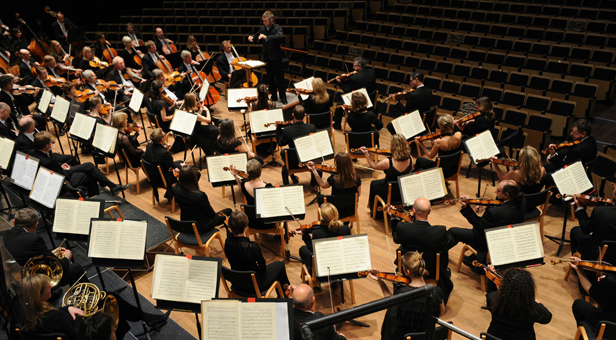 This year’s annual fund raising concert for the Bournemouth Symphony Orchestra’s benevolent fund will take place at Lighthouse, Poole on Sunday, 26 May, at 3pm.

Dynamic Welsh conductor Owain Arwel Hughes will unite the orchestra and Bournemouth Symphony Chorus. The programme will include the rarely performed choral version of Brahms’s ‘Academic Festival Overture’ and the exhilarating violin concerto by Sibelius, played by former winner of the BBC Young Musician of the Year Competition, Jennifer Pike.  A double helping of Tchaikovsky: the concert suite from his romantic ballet score ‘Swan Lake’ followed by the ever-popular ‘1812 Overture’, will bring the afternoon to a rousing conclusion.

Janice Thorgilson, BSO violinist and organiser of the event, is particularly delighted that this year’s concert features Pike, one of the most gifted of the younger generation of British artists. She said, “Jennifer is an inspirational violinist with a truly engaging musicality. This promises to be a spectacular performance of Sibelius’s technically demanding concerto.”

Each year, the benevolent fund responds to requests for financial support from musicians affected by illness or injury, enabling a quicker return to work than might otherwise be the case. Established by BSO chief executive, the late Ken Matchett, in 1958, the fund is financed primarily by the annual concert when every performer donates their services, a tradition which has continued uninterrupted for more than half a century. Members of the orchestra, past and present, are grateful to all the guest artists, including every principal conductor from Rufolf Schwarz to Marin Alsop, who have generously participated over the years.