Burgate School in the spotlight 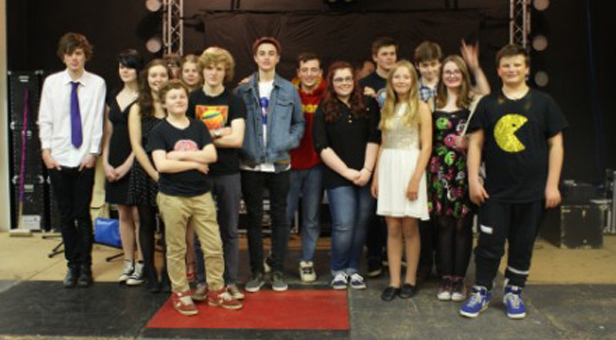 The electrifying final of Burgate’s Got Talent 2013 took place in Fordingbridge on 22 March. The glamorous Miss Proctor took to the stage once more to the host the evenings’ entertainment. The ten acts pulled out all the stops and the judges had an incredibly difficult decision to make.

The winner, Alex Crossley in Year 11 impressed the judges with his natural performance style and the creativity of his original composition. He scooped 1st prize of £200.

In second place were veterans of the competition – The Halapenos. Ollie Manston, James Francis, James Rattcliffe and Freddie Manston delighted the crowd with a medley of classic rock covers. They won £100.

In third place was Jorge Fraser of Year 10, who walked away with the £50 prize. Jorge wowed the crowd and the judges, by performing an intricate diablo routine with tricks galore. Most importantly, he managed to avoid hitting any of the stage lights!

Almost stealing the show was the staff act with Mrs Corlett on piano with backing group  Miss Stephens, Miss Smith, Mrs Dyer, Mrs Hocking, Mrs Barrett, Mrs Dennis and Mrs Burchell. Then to the delight of the pupils in the crowd, out came Mr Cakebread, complete with his blue guitar and Miss Proctor who took the lead vocals on the Glee classic, ‘Don’t stop believing’. Mr Raynor then caused great confusion and hilarity by appearing as a woman to sing Beyonce’s ‘If I were a boy’! Finally, the set was completed by an inspired version of ‘Let it be’ featuring the lyrics, “When I find myself in times of trouble, Mrs Bradfield’s there for me.”

The unsung heroes of the night were the Davy family. Mr Davy, supported by the whole family, yet again provided all of the lighting and sound free of charge. The two live shows would not have been possible without their energy, enthusiasm and superb technical capabilities.

Head of General Studies Mrs Eleanor Oldfield organized the event; she said, “I have been involved in organising Burgate’s Got Talent for five years now and I can honestly say that Friday night’s final was the most spectacular show we have ever seen. I would particularly like to pay tribute to the current Year 11 pupils. This year group have always enthusiastically got involved in the competition. Ruby Mutimer has competently managed the backstage for the last two years and it has been amazing to see the talents of The Halapenos, Hannah Rust, Rebz Moffat, Eleanor Farmer, Libby King and Martin King really develop and grow over the years. This year group has now produced three winners; William Bailey Hobbs in 2011, Jess Ball in 2012 and now Alex Crossley – a hard act to follow. Thank you to all the staff, parents, pupils and the PTA, who made Burgate’s Got Talent 2013 the best yet.”