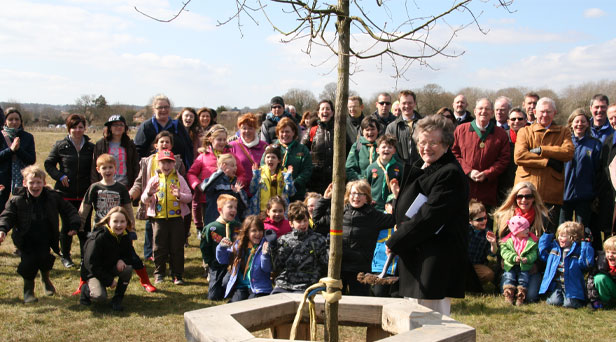 Work to turn Bytheway Field off Leigh Road in Colehill into a Suitable Alternative Natural Green Space (SANG) has been marked with an official opening.

The Chairman of East Dorset District Council, Cllr Lucy Clark performed the ceremony by planting an oak tree watched by users of the field.

The 37-acre field was bought by East Dorset District Council from The National Trust in 2002. Though it has been well-used by walkers and dog owners since then, the Council decided to make it more accessible and user-friendly.

Using money from the Heathland Mitigation Fund – £322,000 from Charles Church and Persimmon Homes in respect of the housing development on the former Flight Refuelling site in Wimborne – Bytheway has now had 3,000 metres of pathway suitable for wheelchairs and pushchairs installed. A lake has been dug at the lowest part of the site, which was often waterlogged, and a walkway constructed across the lake. Benches and signage have been installed and a play area will be constructed to be unveiled in late summer.

It has also been designated as a Suitable Alternative Natural Green Space (SANG) –  an area of green space intended to provide mitigation for the potential impact of residential development on nearby heathland by preventing an increase in visitor pressure on the heathland.

On opening Bytheway, Cllr Lucy Clark said: “I would like to thank all of the organisations who have helped in the design and construction of the redeveloped site. I am happy to say that this project has been brought in under budget and on time.

“I am sure this Bytheway SANG will give many generations an immense amount of enjoyment from walking dogs, watching the herons on the lake or just simply having a great time in the children’s play area. I have no doubt it is going to be very successful and well-used.”