Campbell’s K3 Bluebird is the star 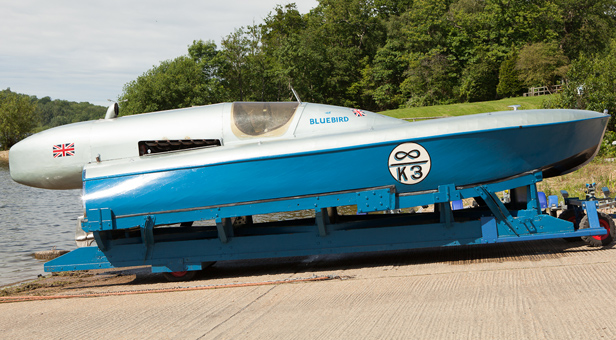 It’s not long to go now until crowds will be flooding into Beaulieu for the annual Boatjumble on Sunday, 28 April 2013, and as a special, last-minute surprise, Beaulieu can now announce that Sir Malcolm Campbell’s famous world water speed record breaker, the K3 Bluebird, will be a star attraction at the event.

Following his success breaking the land speed record in July 1964 in the Bluebird CN7, currently on display in the National Motor Museum, Sir Malcolm Campbell turned his focus to the world water speed record. He commissioned the K3 Bluebird, a hydroplane powerboat, and on the 1 September 1937, set a new world record of 126.33mph on the waters of Lake Maggiore, Italy. Later, he twice broke his own record in the K3, with his final world record, set on Switzerland’s Lake Hallwill in 1938, at 130.93mph. After this, the craft was retired and since 1989 has been undergoing a long restoration, taken on by the K3 Bluebird Project.

Not only will Boatjumble visitors be able to see the K3 Bluebird, it is also hoped she will be started up during the day, to demonstrate the immense power of her incredible engine.

Event visitors can also enjoy all the delights of the Beaulieu attraction, including the National Motor Museum, World of Top Gear, Beaulieu Abbey, Palace House and the picturesque gardens.

On-the-day, all-inclusive admission tickets are priced at £9.70 per adult and £7.50 per child. Advance tickets are available at a discounted rate online at www.beaulieushop.co.uk or on Ticket Line 01590 612888.

For those visitors arriving by public transport, there will be free shuttle buses running between 8am and 6pm from Buckler’s Hard Marina, the Lymington Isle of Wight Ferry Terminal and Brockenhurst train station.

Stand spaces are still available, with Boatjumble stand prices starting at £55; BoatMart and Trunk Trader spaces are priced at £30. To make a stand, Trunk Trader or BoatMart space booking please contact the Events Department by email at events@beaulieu.co.uk or on telephone number 01590 614614.

BoatMall and BoatMart are open to visitors from 9am, with the Boatjumble opening at 10am. The show closes at 5pm.