Careful lady owner – HM The Queen – Daimler under the hammer 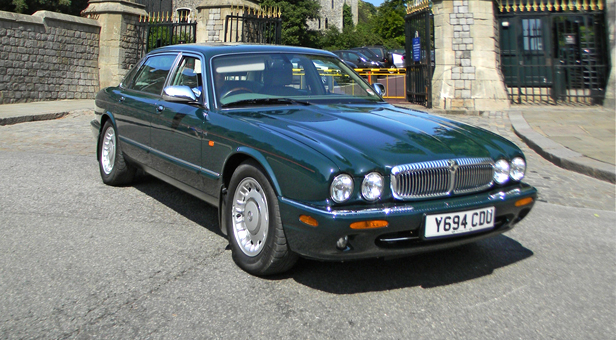 A combination of the ubiquitous ‘one careful lady owner’ and a low recorded mileage will always help when it comes to buying or selling a used car. A pleasing array of optional equipment will never hurt, neither will a full service history.

But when a car has also been scrutinised by its manufacturer over some 2,500 miles prior to delivery, has graced the driveways of the most majestic homes in Great Britain, and has an utterly unique specification, used car appeal takes on a new dimension.

Classic car auction specialist Historics at Brooklands is offering such a motor car at its late summer sale in Surrey on Saturday, 31 August.

Resplendent in its British Racing Green livery, the 2001 Daimler Super V8 LWB limousine was, for three years, the personal transport of Her Majesty The Queen, who drove it within the Windsor Castle estate and to and from Buckingham Palace, for both private and official functions.

As every British monarch from King Edward VII to Queen Elizabeth II has been transported in Daimler limousines, the manufacturer became well versed on protocol and, not surprisingly, this Daimler received somewhat fastidious attention before being presented to Her Majesty.

In fact, the Jaguar/Daimler factory covered some 2,500 pre-delivery miles in order to minutely examine and test every facet of the car to ensure it would receive royal approval.

A further 11,000 miles were covered whilst in the possession of Her Majesty before the vehicle was returned in 2004 to The Jaguar Daimler Heritage Trust, with whom it is still registered today.  It is offered by Historics with precisely the same specification as it was then, including its original tyres, and with a mileage of 15,242.

At The Queen’s request, the Daimler features a number of bespoke modifications. One such is a factory-adapted centre armrest that features a sliding holder specifically designed for Her Majesty’s handbag, allegedly a consequence of having nowhere to put it when driving in the company of the Lady-in-Waiting or security personnel.

A further feature is a pair of neon blue lights by the rear view mirror, which were used to identify the vehicle in which the Queen was travelling when approaching her destination.

In the vehicle’s capacious boot, the fittings can still be found for direct contact to the British Government Home Office and Downing Street, although the working components have now been removed.

Aside from these bespoke changes, this regal Daimler, powered by a 4-litre supercharged V8 developing 375bhp, is equipped with every conceivable luxury extra, and features an opulent soft hide interior with deep lambswool floor rugs. The exterior and interior condition can only be described as stunning.

As one would expect, the car has a full service history by R A Creamer of Kensington and Guy Salmon of Ascot, and is sold with all original documentation, two sets of keys, the original registration number, along with photographs of Her Majesty driving and being driven in it.

And with a Heritage Certificate from Jaguar and a letter from Jaguar Daimler Heritage Trust attesting to its Royal connection, this Daimler Super V8 LWB represents a rare opportunity to purchase a unique, important and highly useable motorcar with indisputable provenance.