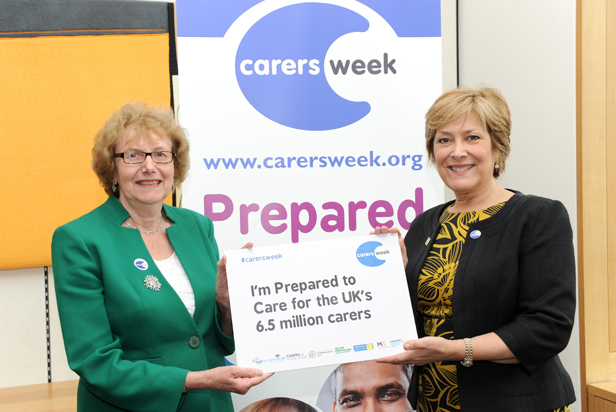 To celebrate the launch of Carers Week, 10-16 June 2013, local MP Annette Brooke has joined forces with actress Lynda Bellingham, to recognise the contribution that carers in Mid Dorset and North Poole make on a daily basis.

In a photocall in Westminster, Annette pledged her support to carers across the constituency as part of the national awareness campaign, Carers Week. The week is an opportunity to celebrate the 6.5 million carers across the UK and raise awareness of the impact that caring has on people’s lives.

In 2013 Carers Week will be focusing on whether the nation is Prepared to Care? The campaign will highlight how the UK’s current carer population is coping, how effectively government is supporting the growing numbers of carers, and whether the wider population is prepared for future caring responsibilities.

As part of Carers Week, a number of events will be held in and around the constituency, to help carers access support and advice. Carers can find out what’s going on atwww.carersweek.org.

Annette said: “Every day across Mid Dorset and North Poole 1 in 8 people will care for a loved one in some form. This hidden group of people give up their time, sometimes their jobs and often make life changing sacrifices to care for someone.

“Carers save this country an incredible £119 billion every year. That’s why I believe as a society we must be Prepared to Care for our carers.”

Actress and former carer, Lynda Bellingham, said:  “My sister and I cared for our mother when she had Alzheimer’s and so I know first-hand the impact that caring can have on someone’s life. That’s why I’m supporting Carers Week because I believe it’s vital that help is made available, especially when you consider that every day 6,000 new people will take on a caring role for a loved one. Carers in this country do a fantastic job and we must come together to support them.”

“It’s fantastic to see MPs pledge their support for Carers Week and carers in the UK. Events like this ensure that carers stay at the top of the political agenda and it’s also an opportunity to remind MPs and decision makers of the overwhelming contribution that carers make.”

Helen Clarke, Carers Week Manager, commented: “It’s fantastic to see MPs taking a stand for carers. Carers form the backbone of our society and that’s why Carers Week is so incredibly important to not only recognise their contribution, but ensure they get the help and support they need.”

Keep up to date with Carers Week at: