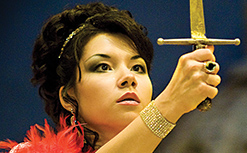 Ellen Kent’s productions of operas ‘Carmen’ and ‘Tosca’ bring a kaleidoscope of colour to the stage with magnificent sets, luxurious costumes and heavenly singing.

Featuring the celebrated Moldovan National Opera and the Moldovan National Philharmonic Orchestra, performing alongside international soloists – these two productions are guaranteed to give you a great night out.

Puccini’s ‘Tosca’ is an epic tale of true love and treachery featuring torture, murder and suicide alongside some of opera’s best-known music. Set in Rome and based on a play by Victorien Sardou, it was once described as a “Shabby little shocker.”

Bizet’s dramatic and sensuous opera ‘Carmen’ tells the story of the downfall of soldier Don Jose, who is seduced by the fiery, beautiful and passionate gypsy Carmen. Abandoning both his childhood sweetheart and his military career, Jose pursues Carmen but loses her to the glamorous bullfighter Escamillo.