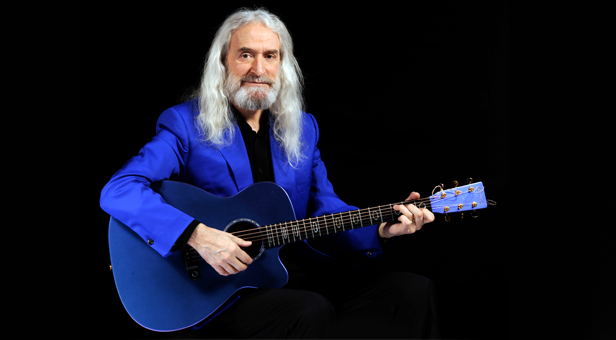 With a devoted following of fans waiting to see him, Charlie Landsborough returns to Lighthouse, Poole’s Centre for the Arts, on Friday 11 October.

Arguably the best known British songwriter you’ve never heard of, Charlie’s music is adored by those that know it and he continues to win new fans with each new release. His latest album, Silhouette, is his 26th full-length release and includes another 12 self-penned songs.

In an interview with Lighthouse, Charlie talks about where he’s come from, where he’s at and where he’s going.

Charlie, another year, another tour – how much do you look forward to them?

I always look forward to each tour, travelling the country with friends and meeting many more, doing the thing we love. Each tour will leave us with another set of memories.

You have a very loyal fan base, does that give you a degree of confidence when you release a new album or get ready to go on tour?

I’m not the most confident of people, but I certainly draw on the expertise of those around me and I’m always greatly heartened and encouraged by the marvellous folk who support us. I don’t need to be reminded that without them I wouldn’t have this life in music.

What’s the best thing about being on tour?

Being with all the aforementioned friends, seeing different places and faces and, of course, the buzz of performing each night.

What do you do to stay in shape for a month or so on the road?

I train on a treadmill albeit rather spasmodically. Thankfully I seem to remain healthy without any strenuous fitness regime. I think it’s after a tour that I’m in need of an MOT.

Do you write and record songs to please yourself, your fans or both?

I write whatever comes to me and of course hope it will in some way touch my audience. If when it’s completed I feel it’s failed in that, then it’s confined to the bottom reaches of my drawer. There is no better feeling than to create something that comforts, lifts or brings pleasure to others.

Where does the inspiration come for your songs?

The inspiration can come from a variety of sources. It might be a phrase someone says, a situation observed or something from your own experiences, or may begin with a simple tune picked out on my guitar. I made an album called The Storyteller in which I have explained before each song what or who was the inspiration behind it. It wasn’t my idea but has proved very popular. It does lend extra meaning to a song to know how and why it was written.

Is there anything you’ve wanted to write a song about but haven’t been able to so far?

I’d like someday to write a song for my home town of Birkenhead and a Christmas carol.

Liverpool was known as the Nashville of the North for a time and you can hear country influences in the early Beatles, why do you think Merseyside took to country so well?

I think a lot of it was the influence of seafarers like my brothers who brought it back from trips abroad, plus the huge Irish and Celtic influence which is at the roots of much country music. It’s music the working man can relate to.

What was the music you grew up with?

I grew up listening to my dad singing the songs of Bing and Issy Bonn and my brothers singing Hank Williams and Jimmy Rodgers. Then when I picked up the guitar along came Lonnie Donegan before Elvis, Jerry Lee and such stormed onto the scene. My likes apart from these are many: Stephen Foster, The Beatles, Bob Dylan, Kate Wolf, Doc Watson, Gordon Lightfoot, Paul Brady, John Prine, Eva Cassidy, Hoagy Carmichael, Randy Newman, Dolly Parton, Clifford T Ward and many more.

After several different jobs, the army and Germany must have broadened your horizons, how important was that in your music career?

All my work experiences, especially the army, improved me as a person and put me in contact with all sorts of people from different backgrounds. They knocked some chips off my shoulder and helped me to respect others. Whilst in the army I began playing in bands and after leaving the Forces I returned to carry on performing. All part of my musical apprenticeship.

A classroom of kids can be a scary audience, how did you win them over? Was that good preparation for playing gigs?

I think that being fair and consistent matters with kids. It also helps to have a sense of humour and for them to be aware that you like them. The music was also on my side. Kids love music too! As a teacher you are a sort of performer so I think it’s good grounding for stage life and perhaps why so many singers and comedians are ex-teachers.

What are fans going to see in your latest show?

Our shows will feature songs from our latest album as well as the songs people know me for as well as a re-introduction of songs we haven’t played in a while. This, plus my usual little quips and anecdotes.

Following the tour, what’s next for Charlie Landsborough?

Following the tour it will be back to writing and recording. I do have some interesting engagements before Christmas arrives and may also fit in a trip to France to visit my son and his family.