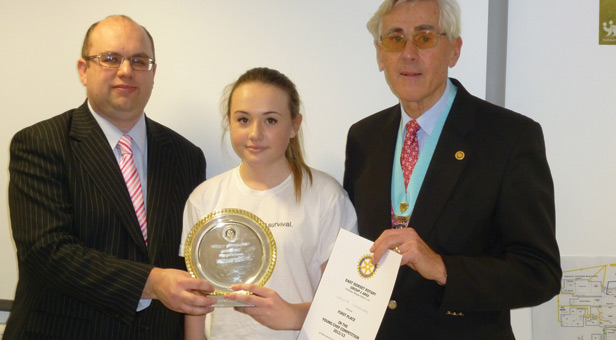 Contestants had to cook a three-course meal in two hours to feed two people for less than £15. Her winning menu was seared scallops served on a pea and mint puree with pancetta crisps followed by a fresh handmade ravioli with a spinach, smoked salmon and ricotta nest encasing a golden egg yolk served with asparagus spears, and a chocolate and raspberry tower served with a raspberry coulis for dessert. Second place went to Shae Hardy from Blandford School. Finbarr Macmillan Caball Ferndown Upper School was third. Prizes of Waitrose vouchers for £60, £40 and £20 were awarded. The judges, led by Luke Matthews, Executive Head Chef at Chewton Glen, found all competitors set a high standard and were evenly matched. Charlotte now goes forward to the District final at Ferndown Upper School on 23 February. PHOTO: Charlotte with the winner’s silver salver, Steve Lee, deputy manager of Waitrose, Wimborne (left), Rotary Wessex Group 1 assistant governor Maurice Turner