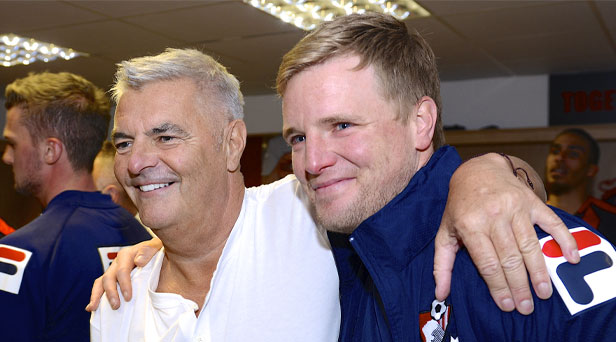 Manager of Bournemouth AFC, Eddie Howe, spoke of his pride after leading the club back to the Championship for the second time in its 114 year history.

The Cherries sealed promotion on the 21 April, with a 3-1 win over Carlisle, while Doncaster and Brentford dropped points to confirm the club’s place in the second tier next season.

Howe was delighted to be able to celebrate promotion for a second time as manager and hoped that his players could go on to become League One champions next weekend.

“I’m really pleased but I get more satisfaction from seeing other people happy. To see the players who have worked so hard to achieve this, to see their reactions and what it means to them, means everything to me.

“I’ve never won a league in all my years as a player and a manager, and we finished second when we won promotion from League Two, so to win something would be a great end to the season.”

Howe also paid tribute to chairman Eddie Mitchell, who brought him back to the south coast from Burnley in October.

“Unfortunately he’s had some criticism during his time here, but you only have to look at how far the club has come, the improvements he’s made to the ground and the youth structure, his vision for the club,” he said.

“He deserves full credit and he’s done a very good job for this football club.”